Molson Coors Beverage Company (TAP - Free Report) has reported second-quarter 2021 results, wherein earnings and sales beat the Zacks Consensus Estimate. Both top and bottom lines improved year over year. Results reflected gains from investments, partnerships and product launches, which were a part of its revitalization plan. The company announced a new hard seltzer canning line in the United Kingdom along with significantly expanding production of hard seltzer in Canada.

Backed by the better-than-expected results, shares of the company rose more than 2% in the pre-market session. Shares of this Zacks Rank #2 (Buy) company have gained 9.6% year to date compared with the industry’s rise of 4.4%.

The company’s adjusted earnings of $1.58 per share grew 1.9% year over year and beat the Zacks Consensus Estimate of $1.35.

Net sales increased 17.4% to $2,939.4 million and surpassed the Zacks Consensus Estimate of $2,875 million. This can be attributable to an increase in financial volume, including a rise of 1.9% in North America and 17.8% in Europe as well as higher net sales per hectoliter. Positive brand and channel mix along with higher pricing in North America and Europe remained upsides.

Molson Coors’ worldwide brand volumes advanced 3.1% to 22.1 million. Financial volumes grew 5.5% to 23.8 million hectoliters on the back of elevated premium and core brand volumes, the positive impact of shipment timing in the United States and the on-premise re-openings, which partly offset reduced economy brand volumes.

Underlying (non-GAAP) EBITDA inched up 0.8% to $697.8 million year over year. However, the metric declined 1.3% year over year at cc due to higher marketing costs stemming from increased investments in brands, innovation and cost-reduction efforts, which somewhat offset higher sales growth. 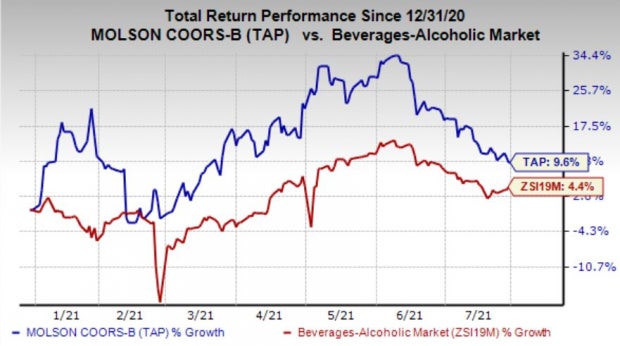 North America: Net sales in the segment rose 10.1% to $2,422.4 million on a reported basis and 8.3% at cc, driven by increased sales per hectoliter and higher financial volumes. Financial volumes went up 1.9% year over year on the back of favorable shipment timings in the United States along with strength in Latin America. North America brand volumes declined 1%. In the United States, brand volumes fell 4% due to the de-prioritization of non-core SKUs in the economy unit. However, domestic shipment volumes were up 1.2%. In Canada, brand volumes declined 5.1% but improved triple digits in Latin America in the reported quarter. Net sales per hectoliter, on a brand volume basis, rose 4.7% at cc on a favorable brand mix in the United States and higher net pricing in the United States and Canada. On the flip side, an unfavorable geographic mix stemming from higher license volumes in Latin America acted as a deterrent. The Canada region also witnessed growth in net sales per hectoliter, on a brand-volume basis, driven by higher pricing and a positive sales mix. Underlying EBITDA fell 10% on a reported basis to $586.8 million and 10.7% at cc.

Europe: The segment’s net sales on a reported basis surged 69.5% to $520.5 million and 52.3% at cc. The uptick was due to higher volumes and a rise in net sales per hectoliter. Net sales per hectoliter (brand volume basis) in the segment were up 16.6% at cc, resulting from a favorable channel, brand, geographic mix and higher pricing. The segment’s financial volumes increased 17.8% and brand volumes were up 15.4% owing to the reopening of the on-premise channel. The segment reported an underlying EBITDA that skyrocketed 189% at cc to $100 million, driven by higher financial volumes, positive mix and increased pricing, which somewhat offset rising MG&A expenses.

Molson Coors ended the second quarter with cash and cash equivalents of $1,308.9 million. At the end of second-quarter 2021, the company had a total debt of $8.2 billion, resulting in net debt of $6.9 billion. In July, the company repaid 2.1% senior notes worth $1 billion, which matured on Jul 15.

It used $748.5 million of cash flow in operating activities in the six months ending Jun 30, 2021, resulting in a negative underlying free cash flow of $558.2 million.

The company also approved a quarterly dividend of 34 cents on its class A and class B common shares, which is payable on Sep 17 as of shareholders’ record on Aug 30.

Despite continued uncertainties related to the pandemic, management retained its view for 2021. The company is progressing with its revitalization plan, which targets long-term revenue and underlying EBITDA expansion.

Net sales are projected to grow in the mid-single digits at constant currency. Underlying EBITDA is likely to remain almost flat year over year at cc. Management estimates achieving a net debt to underlying EBITDA ratio of 3.25X by the end of 2021 and below 3.0X by 2022-end.

Further, underlying depreciation and amortization are projected at $800 million, while the underlying effective tax rate is likely to be 20-23%. Consolidated net interest expenses are anticipated to be $270 million, plus or minus 5%.