Should Long-Term Investors Buy these Growth Stocks Before Earnings?

The largest technology companies in the world reported earnings results in the last week of July. Wall Street’s reactions have been largely subdued to strong showings from Apple (AAPL - Free Report) , Microsoft (MSFT - Free Report) , and others. The response makes sense given these giants and the broader market surged to records ahead of the heart of quarterly earnings season.

Investors shouldn’t be surprised if some of these standouts experience more selling in the near-term as tech-tracking ETFs such as QQQ (QQQ - Free Report) sit near some elevated technical levels. The last pullback was wiped out so quickly with fresh records that Wall Street might decide its time to pull profits again, which is completely normal and healthy.

Even with the possibility of more near-term selling on the table, investors should rarely be afraid to buy strong stocks they plan to hold for years because timing the market is extremely difficult and often counterproductive to those with long-term strategies. The last 18 months showcased the difficulties of timing the market, while highlighting the benefits of more buy and hold investing.

The bullish backdrop for the market remains in place despite economic slowdown fears and Delta coronavirus worries. New data out Thursday showed the U.S. economy expanded beyond its pre-pandemic levels in the second quarter, with GDP up 6.5%. Meanwhile, consumer confidence popped in July to the highest level in 17-months.

On top of that, the Fed on Wednesday offered up its somewhat standard sentiment regarding eventual rate hikes. More importantly, Wall Street is set to keep chasing returns in equities for the foreseeable future since rates will remain historically low for years to come even when the central bank starts to lift them above rock-bottom levels—the 10-year U.S. Treasury has remained below 3% for nearly all of the past decade.

Given this backdrop, let’s look at two stocks that operate within booming growth industries that investors might want to consider buying before they report earnings… 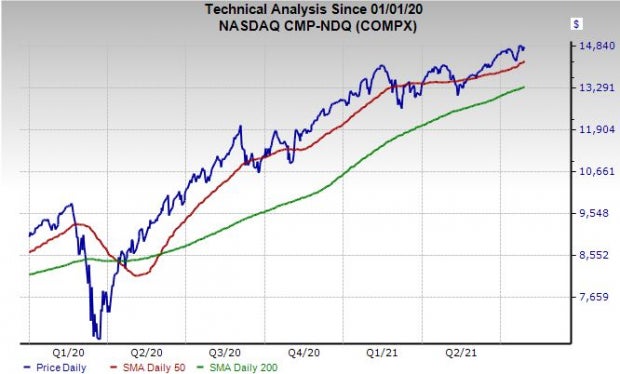 The streaming entertainment age is here to stay and legacy media continues to lose consumers in droves. Netflix (NFLX - Free Report) boasts over 200 million paid subscribers and after a decade of dominance, the streaming pioneer is part of a quickly-expanding group of streaming players.

Disney (DIS - Free Report) and its massive catalog has successfully stormed onto the scene, as Amazon (AMZN - Free Report) , Apple, and nearly every other media company enter the streaming market. As more consumers cut the cord in favor of non-ad-supported services such as Disney+ and NFLX, advertisers and marketers clamor to reach consumers.

This where Roku is poised to keep cashing in and it hardly matters what service grabs the most attention or who has the hottest show. Roku’s small plug-in devices allow users to watch streaming TV content from nearly every service under the sun. Its tech is also built into smart TVs and it was the No. 1 smart TV OS sold in the U.S. in 2020, with nearly 40% market share. And Roku became a Wall Street darling on the back of its ability to attract advertisers in the digital age.

Roku makes money by selling ad space across its marketplace and taking a share of streaming service subscription revenue and ad inventory. Roku allows marketers to buy targeted ads, promote their streaming content or platforms, and more. Digital could account for 65% of the roughly $240 billion-a-year industry in the U.S. by 2023, up from just one-third of ad spending only a few years ago. The company has boosted its ad credentials through acquisitions, which includes Nielsen's Advanced Video Advertising business.

Roku is also exposed to the content side through its own channel that allows users to watch free, ad-supported streaming movies and TV shows. Roku topped Q1 estimates, with its ad-heavy and higher margin platform revenue up 101% to account for 80% of total sales. The company also added 2.4 million active accounts to close at 53.6 million. Plus, its monetized video ad impressions more than doubled YoY.

The streaming TV firm has also destroyed our bottom-line estimates in the trailing four quarters, including posting three-straight periods of positive adjusted earnings, when Zacks estimates called of a loss. Roku’s consensus EPS estimates skyrocketed following its Q1 release, with its FY21 figure up from -$0.37 to +$0.45 a share and FY22 at +$0.97 vs. $0.33. 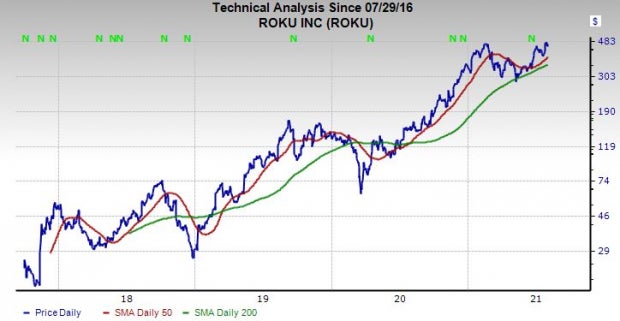 The stock has soared 200% in the past year and 925% in the last three years to match Shopify’s (SHOP - Free Report) run. Like many other growth names and tech standouts, Roku hit records this week. The stock slipped Thursday and it could face selling pressure, after it’s 40% run since early May.

That said, the stock does rest below overbought RSI levels (70) at 60 right now. And despite sitting near fresh highs, it trades at a nearly 25% discount to its year-long highs at 18.5X forward sales. Therefore, investors who want to watch stocks climb for years, if not decades might want to consider Roku.

Etsy shined during the early months of the pandemic as people bought masks from the niche e-commerce site. The Brooklyn-based firm is clearly much more than a mask seller and it was expanding well before the pandemic and it will keep growing long after. The company allows individuals, entrepreneurs, and small businesses to sell everything from handmade clothing and jewelry to art, home décor, and more.

Etsy, which makes money from transactions, advertising, and paid search, has posted strong growth since its 2015 IPO, including roughly 37% sales expansion in FY19 and FY18. It has stood out in a crowded market dominated by Amazon by selling products that might not be found on eBay (EBAY - Free Report) , the Seattle giant, or Target (TGT - Free Report) . Etsy, which also owns musical instrument marketplace Reverb, is a massive e-commerce arts and craft platform that has expanded a ton recently. 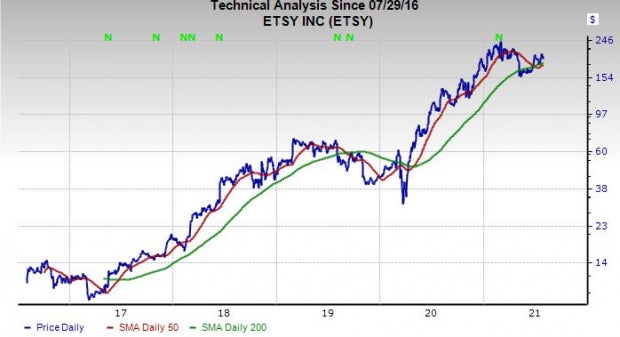 The firm on July 13 completed its purchase of fashion resale app Depop for $1.6 billion. Depop is widely popular within the fast-growing resale space, especially with Gen Z. Etsy also in early July finalized its purchase of Elo7, which “specializes in unique, handmade items, and is ranked as a top 10 e-commerce site in Brazil.” The newly beefed-up company’s ‘house of brands’ features four standalone e-commerce platforms ready to flourish.

Last year, Etsy’s sales soared 111% to $1.7 billion, boosted by pandemic buying. Luckily, only 4% of Etsy’s overall gross merchandise sales came from masks in Q4 FY20. And Etsy’s overall active sellers climbed 62% in 2020 to 4.4 million, with its active buyers up 77% to 82 million. Its first quarter sales then jumped 142%, with active buyers up to 91 million and sellers up to 4.7 million.

The company has also topped our adjusted earnings estimates by an average of 47% in the trailing four periods. And Etsy’s mixed EPS revisions help it land a Zacks Rank #3 (Hold) at the moment. As with Roku, Wall Street is high on the stock, with 12 of the 15 brokerage recommendations Zacks has coming in at “Strong Buys.”

Etsy shares have climbed 80% in the last year to crush the benchmark index and its industry. Wall Street has cooled down on the stock, as they did with many high-flyers. But unlike other tech and growth names, Esty has yet to return to its records. Etsy shares are still up 1,500% in the past five years and closed regular hours Thursday 20% below its highs at $199 a share.

The stock has regained some momentum and it’s once again above its 50-day and 200-day moving averages. Etsy sits near neutral RSI (50) levels at around 55 right now. Etsy also trades at a 45% discount to its own year-long highs in terms of forward earnings and 35% below when it comes to forward 12-month sales at 10.2X.

All that said, some investors might want to hold off on Etsy until after it reports. But it certainly has legs within e-commerce and its acquisitions should help it reach new customers.