ArcelorMittal (MT - Free Report) recorded profits of $4,005 million or $3.46 per share in the second quarter of 2021, compared with a loss of $559 million or 50 cents in the year-ago quarter. Earnings per share topped the Zacks Consensus Estimate of $2.70.

Total sales increased around 76% year over year to $19,343 million in the quarter. However, the figure missed the Zacks Consensus Estimate of $19,668.5 million. Sales were driven by higher average steel selling prices and shipments as well as higher iron ore prices, partly offset by lower iron ore shipments.

Total steel shipments climbed roughly 31% year over year at 16.1 million metric tons in the reported quarter. Average steel selling prices were up around 61% year over year. The steel giant benefited from continued demand recovery in the second quarter.

ArcelorMittal raised its outlook for global apparent steel consumption (“ASC”) for 2021 as it expects demand to further improve in the second half. It now envisions ASC to increase 7.5-8.5% in 2021, up from its earlier growth expectation of 4.5-5.5%. A favorable supply demand balance and a low inventory environment are supporting higher utilization levels and healthy steel spreads, the company noted.

Shares of ArcelorMittal have surged 220.2% in a year compared with a 146.5% rise of the industry. 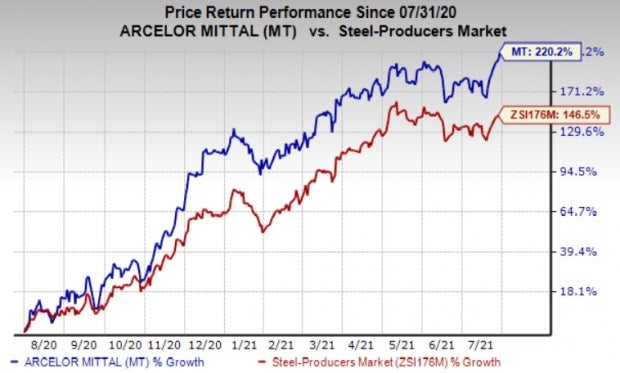 Nucor has a projected earnings growth rate of 490.1% for the current year. The company’s shares have surged around 120% in a year.

LyondellBasell has an expected earnings growth rate of 222.6% for the current year. The company’s shares have shot up around 61% in the past year.

Cabot has an expected earnings growth rate of around 137.5% for the current fiscal. The company’s shares have gained roughly 40% in the past year.