Shares of Vertex have lost 15.2% so far this year against the industry’s increase of 0.3%. 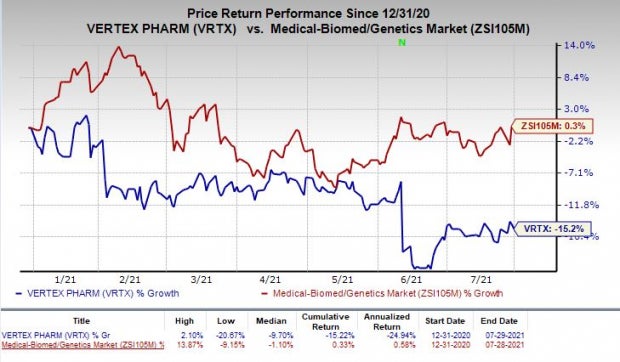 Vertex’s newest drug, Trikafta, a triple combination therapy, generated sales worth $1.26 billion, up 36.8% year over year, driven by high level of treatment penetration in the United States as well as strong launches in international markets.

In June 2021, the FDA approved Trikafta to treat CF in children aged six to 11 years who have at least one F508del mutation in the cystic fibrosis transmembrane conductance regulator (“CFTR”) gene or a mutation in the CFTR gene that is responsive based on in vitro data.

Kaftrio was approved in Europe in August 2020. Following the nod, the drug saw substantial uptake across all European countries. The company has now secured reimbursement agreements in more than 15 countries, most importantly the large markets of Germany and the United Kingdom.

Symdeko/Symkevi registered sales of $134 million in the quarter, down 22.1% year over year.

Kalydeco recorded sales of $183 million in the quarter, reflecting a 9.8% decrease year over year. Orkambi generated sales of $221 million in the reported quarter, down 4.7%. Sales of Kalydeco, Symdeko/ Symkevi and Orkambi were hurt by patients switching to Trikafta.

Adjusted operating income rose 18% to $1.03 billion in the quarter, driven by higher revenues and cost control.

Adjusted research and development (R&D) expenses rose 19.3% to $383 million due to expansion of CF and non-CF pipeline.

Adjusted selling, general and administrative (SG&A) expenses increased 5.4% to $154 million in the reported quarter due to investments made to support the expansion of the CF business.

Vertex revised its product revenue guidance for 2021 upward owing to strong business performance and reimbursement agreements for Kaftrio in Europe, along with approval for younger age groups in the United States.

The company now expects revenues from CF products in the range of $7.2-$7.4 billion compared with the previous range of $6.7-$6.9 billion. The midpoint of the guidance reflects approximately 18% growth over the previous guidance.

Combined adjusted R&D and SG&A expenses for 2021 are expected in the band of $2.25 to $2.30 billion. Adjusted tax rate is expected in the range of 21-22%. All unchanged from the previous guidance.

While Vertex’s main focus is on the development and strengthening of its CF franchise, the company also has a rapidly advancing early-stage portfolio in five additional diseases beyond CF.

Per the company, apart from CF, Vertex’s most advanced program is CTX001, a CRISPR/Cas9-based gene editing therapy, which is being co-developed in partnership with CRISPR Therapeutics (CRSP - Free Report) for two devastating diseases — sickle cell disease (“SCD”) and transfusion-dependent beta thalassemia (“TDT”). In June 2021, the companies announced positive new data from a phase I/II study evaluating CTX001 in patients with TDT as well as those with SCD, with a follow-up of at least three months. The gene-editing therapy candidate demonstrated a consistent and sustained response to treatment in the given patient population.

In April 2021, Vertex increased its investment in the collaboration. Under the amended deal, Vertex will lead the global development and future commercialization of CTX001.

Enrolment is underway in a phase II study on VX-147, its first oral small molecule medicine in APOL1-mediated focal segmental glomerulosclerosis. Data from the study is expected in the second half of 2021.

VX-880 is Vertex’s first of the two investigational programs for the transplant of functional islets into patients. VX-880 is for the transplantation of islet cells alone, using immunosuppression to protect the implanted cells. The second program will involve the implantation of the islet cells inside an immunoprotective device. A phase I/II study on VX-880 in the islet cells alone program, is currently ongoing for the treatment of type I diabetes (T1D). Initial data from the same is expected in 2022.

In June 2021, Vertex decided to stop the late-stage development of its investigational oral small molecule corrector, VX-864, which was being evaluated for the treatment of alpha-1 antitrypsin deficiency (“AATD”). The decision was taken despite a phase II study on the candidate in AATD, an inherited condition that raises risk of lung and liver disease, achieving its primary endpoint.

The company believed that the magnitude of treatment effect observed in the study is unlikely to lead to any substantial clinical benefit.

What's in Store for Amgen (AMGN) This Earnings Season?