Revenues, primarily from its cardiovascular drug, Vascepa, were up almost 14% year over year to approximately $154.5 million in the quarter, in line with the Zacks Consensus Estimate.

Shares of Amarin were up 9.5% on Aug 5, following the strong quarterly results. The stock has declined 1% so far this year against the industry’s 2.6% increase. 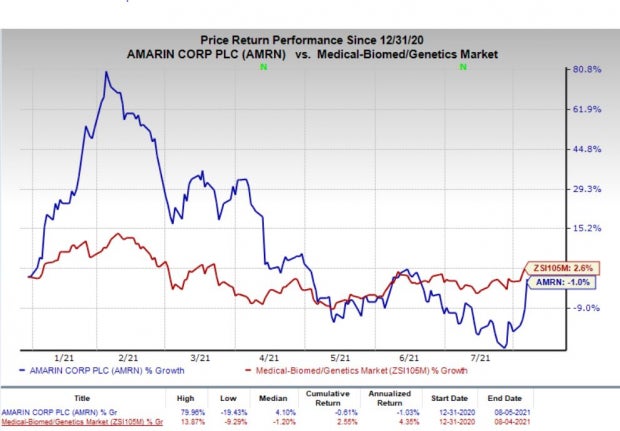 Product revenues, entirely from Vascepa, were $153.8 million, up 15% year over year driven by increased demand for the drug in the United States. However, the drug is facing generic competition for its reduction of triglyceride levels indication. The company stated that Vascepa retained approximately 89% of the total icosapent ethyl normalized prescriptions in the first half of 2021 amid generic competition.

Per IQVIA, normalized prescriptions for Vascepa increased approximately 2% year over year in the United States during the second quarter of 2021. On its earnings call, the company stated that although there has been recovery in in-person visits to healthcare professionals, the rates still remain below pre-pandemic levels.

We note that Hikma Pharmaceuticals launched a generic version of Vascepa in the United States in November last year. Dr. Reddy's Laboratories (RDY - Free Report) launched a generic version of Vascepa in June. The label of both generics includes reduction of triglyceride levels indication but not the cardiovascular risk reduction indication. Meanwhile, Teva Pharmaceuticals’ (TEVA - Free Report) abbreviated new drug application for Vascepa generic has been removed from the FDA website.

In April, Amarin received marketing authorization for Vazkepa (Vascepa) in Europe and the United Kingdom for two indications — adjunct therapy to reduce cardiovascular risks and adjunct therapy to reduce triglyceride level. The drug is approved for both these indications in the United States. The company is on track to launch the drug in Europe, beginning with Germany, with proposed pricing of approximately €200 ($240) per month in September.

The drug is also expected to receive approval in Mainland China and Hong Kong by year-end.

These developments are likely to boost the prospects of the drug going forward as Europe and China represent significant market opportunity. Also, there is no generic overhang in these three territories so far. The company has plans to expand in key 20 countries with high cardiometabolic rates going forward with potential market opportunity of more than $1 billion.

A better-ranked company from the biotech sector is Vertex Pharmaceuticals Incorporated (VRTX - Free Report) , sporting a Zacks Rank #1 (Strong Buy). Earnings estimates for 2021 and 2022 have risen 9.6% and 6.3%, respectively, over the past 30 days. You can see the complete list of today’s Zacks #1 Rank stocks here.

fuboTV (FUBO) to Report Q2 Earnings: What's in the Cards?