Net sales increased around 32% year over year to $1,588 million in the quarter. However, the figure lagged the Zacks Consensus Estimate of $1,718.7 million.

Sales in the UAN segment rose 41% year over year to $434 million. Sales volume increased owing to due to inventory draw-down. Average selling prices rose due to lower global supply availability and higher demand.

Cash flow from operations amounted to $128 million in the reported quarter, down around 70% year over year.

CF Industries expects nitrogen pricing to be positive as higher economic activities, the need to replenish coarse grains stocks globally and increased energy prices in Europe and Asia is expected to sustain a tighter global nitrogen supply and demand balance into 2023.

Shares of CF Industries have gained 34.9% in the past year compared with 50.6% rise of the industry. 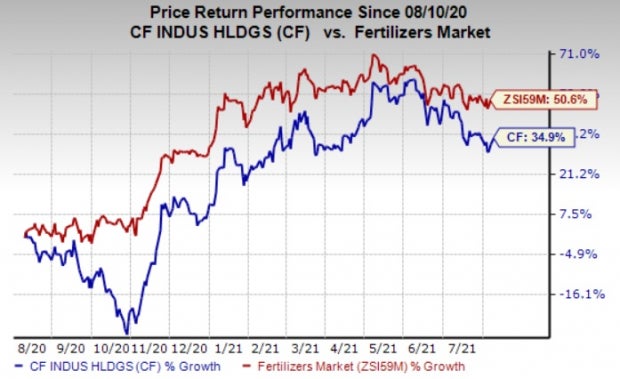 Nucor has a projected earnings growth rate of 455.7% for the current year. The company’s shares have surged around 137% in a year. It sports a Zacks Rank #1 (Strong Buy). You can see the complete list of today’s Zacks #1 Rank stocks here.

ArcelorMittal has an expected earnings growth rate of 1,731.2% for the current year. The company’s shares have shot up around 183% in the past year. It carries a Zacks Rank #1

Olin has an expected earnings growth rate of around 590.4% for the current fiscal. The company’s shares have surged roughly 304% in the past year. It carries a Zacks Rank #2 (Buy).