PPG Industries, Inc. (PPG - Free Report) has announced the setup of a facility in Tangier, Morocco, that will manufacture automotive sealants for local vehicle production.

The plant is the company’s first automotive coatings production facility in Africa. It will be initially supplying materials for Renault Group’s Dacia brand vehicles that are produced in Tangier and Casablanca.

The facility will make sealants that have room for greater flexibility in vehicle design and manufacturing. The company is evaluating the local production of additional adhesive, sealant and coatings technologies in order to provide supply to the vehicle manufacturers that are scaling up their production in Morocco.

The company noted that the move is a vital step in facilitating the local supply for automotive original equipment vehicle manufacturers in Morocco. It is already one of the largest and fast developing vehicle producing countries in Africa with vehicle output estimated to increase considerably by the addition of two more production facilities by 2030. The investment at Tangier will enable the company to expand in regions that are likely to come in the growth trajectory in future. 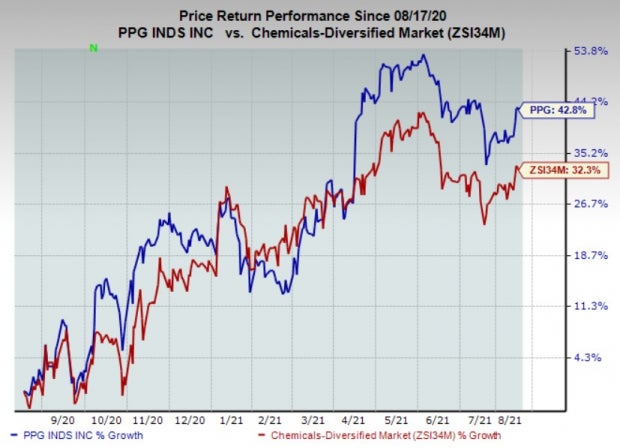 The company expects higher aggregate input and logistics costs in the third quarter compared with the second quarter. It will continue to prioritize further selling price increases, which is expected to fully offset raw-material cost inflation before the end of 2021, on a run-rate basis.

The overall economic demand growth is projected to remain broad and strong. The company also anticipates strong sales growth later this year and in 2022 aided by its technology-advantaged products, diverse geographic and end-use market participation as well as its aerospace business’ continued recovery.

BASF has a projected earnings growth rate of 96.7% for the current year. The company’s shares have grown 37.3% over a year.

LyondellBasell has a projected earnings growth rate of 222.6% for the current year. The company’s shares have risen 53.3% over a year.

Avient has a projected earnings growth rate of 75.2% for the current year. The company’s shares have rallied 92.1% over a year.

The 5 Best Stocks to Buy Now on Relative Price Strength