Equinor ASA (EQNR - Free Report) will recommence loading activities at its Sture crude export terminal located on the west coast of Norway, per a report by Reuters.

Sture is a major export facility for crude oil, which is being transported through pipelines from several offshore fields, including the company's Oseberg field.

Loading operations at the Sture terminal were interrupted last week after environmental activists from the Extinction Rebellion group breached the safety zone of the facility. Activists entered the security zone with a sailing boat and blocked a road that led to the terminal. Hence, the company discontinued the loading activities of the TS Bergen Aframax vessel. Apart from this, Equinor’s other activities were not affected.

Per a media release, Equinor signed an agreement with the Ulsan Offshore Wind Countermeasures Committee to proceed with the Firefly project in South Korea. Firefly is an 800-MW floating wind project, which is being developed by Equinor about 70 kilometers east of the Ulsan Port. The area involves two sites, each having a 75-square kilometer size.

The Offshore Wind Countermeasures Committee, an Ulsan-based fishermen organization,and Equinor formed a consulting body to promote the project and focus on compensating for losses to the fishing industry. The parties also agreed to cooperate to gain approval for the power generation business license for the project.

Equinor plans to increase its renewable capacity installed by 30 times by 2035. The company aims to become a global offshore wind major and sees strong potential for offshore wind in South Korea, a country considered to be an important market for floating offshore wind.

Shares of the company have outperformed the industry in the past six months. Its stock has gained 4.9% against the industry’s 2.1% fall. 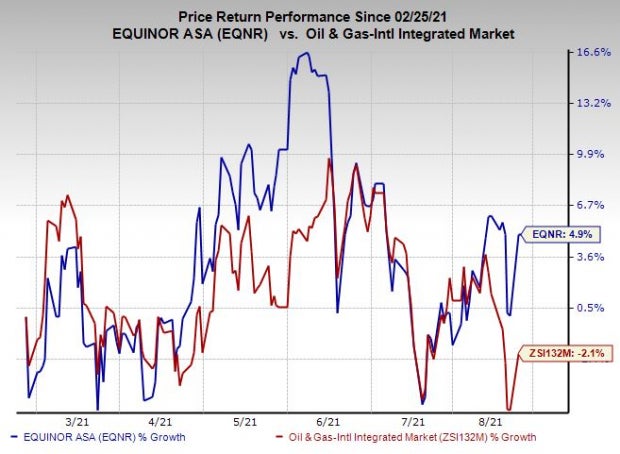 The company currently has a Zack Rank #3 (Hold).

ConocoPhillips’ earnings for 2021 are expected to increase 11.6% year over year.