Equinor ASA (EQNR - Free Report) recently announced that offshore Troll phase 3 production has commenced in the North Sea. The field came online in 1995. With the commencement of the third phase, the Troll A platform and Kollsnes processing facility’s production life is expected to extend beyond 2050.

Equinor labels the Troll phase 3 as one of its most profitable projects as it has a breakeven price of $10 per barrel. Also, its low carbon dioxide emissions of less than 100 grams per barrel of oil equivalent are praiseworthy. The company has managed to reduce emissions from the project as the Troll A platform is powered by electricity from shore.

The phase three will produce from the Troll West gas cap and it has a recoverable resource of 347 billion cubic metres of gas. The gas cap is placed over the oil column in Troll West. Oil and gas production from the site will continue simultaneously. The project includes eight wells, divided into two templates, which are connected to the Troll A platform through an umbilical.

The company expects investment for the project to amount to NOK 8 billion (around $920.8 million). Troll is one of the largest gas fields of Norway that caters to almost 8% of the European Union’s gas consumption. As economies are looking for emission reduction, the demand for natural gas is expected to rise over the coming years. Equinor, with its extended Troll A life span, is well placed to generate massive profits from natural gas production.

The project, which was earlier scheduled to commence in the second quarter, faced delays due to the coronavirus pandemic. Equinor is the operator with a 30.58% stake in the third phase. It has Petoro AS, and subsidiaries of Royal Dutch Shell plc (RDS.A - Free Report) , TotalEnergies SE (TTE - Free Report) and ConocoPhillips (COP - Free Report) as partners in the project with 56%, 8.10%, 3.69% and 1.62% interest, respectively.

Shares of the company have gained 12.9% compared with the industry’s 1.3% growth in the past six months. 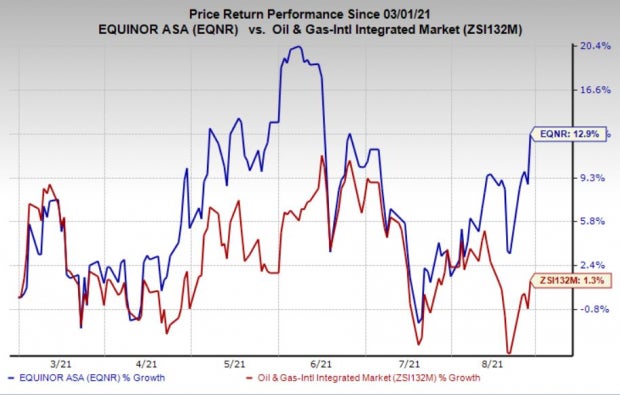 The company currently has a Zacks Rank #3 (Hold). You can see the complete list of today’s Zacks #1 Rank (Strong Buy) stocks here.