It is worth mentioning that Masimo SafetyNet Alert has not yet received the FDA 510(k) clearance and is unavailable for sale in the United States.

This launch is likely to provide a further boost to Masimo’s already strong product portfolio.

For investors’ note, opioids are powerful painkillers that are commonly used as part of the recovery process post surgery and administered to patients suffering from chronic pain. However, these painkillers can also slow or stop one’s breathing that might lead to heart attack, brain damage and even death. An estimated number of above 100,000 people, globally, die each year from opioid overdose. 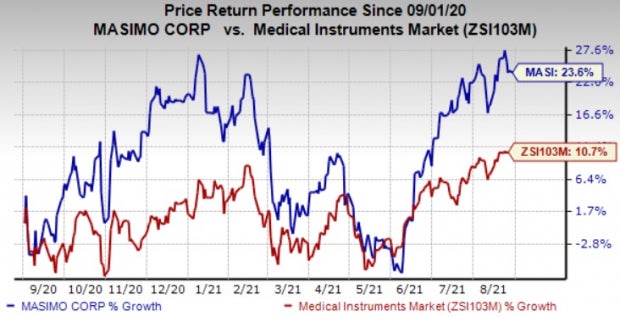 Masimo SafetyNet Alert provides the breakthrough Masimo SET pulse oximetry, which is utilized in hospitals worldwide, in a home setting. On the basis of clinical proof, SET has enabled care teams to boost patient safety and outcomes.

This newly launched system offers escalating alerts when there are drops in oxygen levels and has been developed to wake up the person suffering from opioid overdose. If they do not wake up, the system sends alerts to others when help might be required.

Per a report by Market Research Future, the global non-invasive monitoring device market is anticipated to witness a CAGR of 6.8% and is estimated to reach $21.59 billion by 2023. Rising adoption of non-invasive technology, and increasing prevalence of cardiovascular and neurovascular diseases are driving this market’s growth. Hence, this launch is well-timed for Masimo.

This month, Masimo announced the findings of a study published in the Turkish Journal of Emergency Medicine, wherein researchers explored the utility of noninvasive, continuous Masimo Pleth Variability Index (PVi) when it comes to monitoring volume status and changes in spontaneously breathing patients who are undergoing hemodialysis (HD). Per the findings, a strong correlation has been found between change in PVi and the volume of fluid removed.

Again, this month, the company announced the findings of a study, published in the Journal of Pain & Relief, wherein researchers explored the utility of Masimo Bridge in reducing postoperative opioid needs in patients undergoing kidney donor surgery. Based on the positive outcomes, researchers concluded that Bridge may represent a complementary approach to lower postoperative opioid requirement.

In July, the company announced the release of its latest and most-advanced rainbow SET board, MX-7. The board has been engineered for integration into numerous multi-parameter monitors, which are available from the company’s various original equipment manufacturing (“OEM”) partners.

Shares of the company have gained 23.6% in the past year compared with the industry’s growth of 10.7%.