Onto Innovation (ONTO) Sees Robust Demand for Dragonfly System

Onto Innovation Inc. (ONTO - Free Report) has announced that the unit volumes of its Dragonfly inspection system grew 50% in the first half of 2021 from the prior-year period.

The rapidly growing installed base is expected to continue expanding for the rest of the year, resulting in an estimated CAGR of 70% from 2018 to 2021.

Onto Innovation shareholders’ money has more than doubled over the past year. The stock has risen 123.5% in this time frame against the industry’s decline of 42.7%. 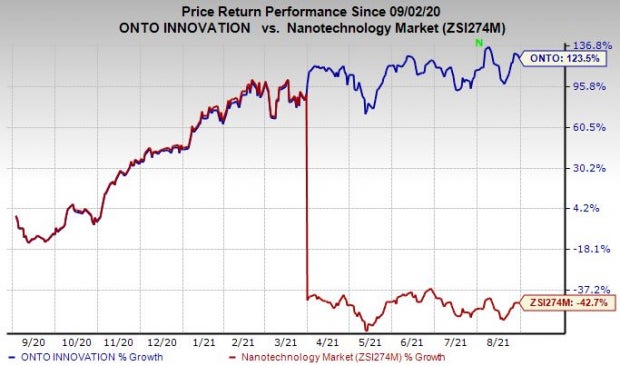 The Dragonfly system was released to redefine the industry’s expectations for sensitivity, throughput and reliability. Thanks to the speed at which the system has been adopted, it has turned out to be the game-changing inspection and metrology solution.

Tier 1 customers, including major integrated device manufacturers and foundries, have adopted the Dragonfly G3 system — the latest model of the Dragonfly family.

The Dragonfly G3 platform offers sub-micron sensitivity and higher throughput compared with the previous generation along with Onto Innovation’s Clearfind technology. Its ability to produce data streams that detect defects makes this system an important tool in the thriving areas of 5G, artificial intelligence and high-performance computing.

The inspection system is being adopted by manufacturers of complementary metal oxide semiconductor image sensor devices.

Onto Innovation is well positioned to benefit from strong customer demand for its solutions across the semiconductor value chain while improving its operational efficiency. Its revenues are likely to gain from expansions and node transitions in logic and memory as well as the growing investments in packaging and radio frequency process technology.

The Wilmington, MA-based company is progressing well to bring new solutions into markets to further expand its growth opportunities.

Clearfield delivered a trailing four-quarter earnings surprise of 49%, on average.

Juniper pulled off a trailing four-quarter earnings surprise of 7.5%, on average.

Qualcomm delivered a trailing four-quarter earnings surprise of 13.5%, on average.