Read MoreHide Full Article
The AES Corporation (AES - Free Report) recently purchased its remaining 49.9% stake in AES Colon, thereby increasing its ownership to 100% for this liquefied natural gas (LNG) plant. It is worth mentioning that the plant, which includes a 381-megawatt LNG-fired power plant and a 180,000 cubic metres LNG storage and regasification facility, resumed operations in 2018.
Notably, 100% of the output from AES Colon facility is contracted through 2028. This is likely toboost the company’s future revenues and, in turn,drive earnings.

To mitigate the impacts of climate change, utilities are going through a rapid transformation toward a carbon-free environment and thus adopting cleaner energy resources. Since, LNG emitsless carbon than other fossil fuels, expansion in the LNG market is in vogue lately.
Consequently, to capitalize on the favorable trends in the LNG arena, utility companies are investing significantly in development of natural gas liquefaction storage and regasification facilities to support future growth.
Per Research and Markets firm, the global LNG market is expected to witness a CAGR of 6.92% during 2021-2026 period. It states that the global liquification capacity is expected to triple during the period with maximum capacity additions coming from North America.

To reap the benefits of the aforementioned growth prospects in the LNG market, AES Corp has been undertaking significant initiatives.
Apart from the aforementioned LNG plant, AES Corp has two LNG regasification terminals in Central America and the Caribbean, with a total of 150 TBTU (Trillion Thermal British Thermal Units) of LNG storage capacity.
The company is also focused in expanding its footprint globally and is developing a 480 TBTU of LNG storage capacity co-located with 2.2 GW (gigawatt) of combined cycle plants in Veitnam, under a 20-year contract with the Government of Vietnam. Without a doubt, such expansion projects would boost AES Corp’s footprint in the expanding LNG marketin the longhaul.

To reap the benefits of the expanding LNG storage and regasification facility market, other Utility players have been making efforts as well.
For instance, in July,Sempra Energy (SRE - Free Report) entered into a memorandum of understanding (MOU) with the Polish Oil & Gas Company for purchase of approximately 2 million tonnes per annum (Mtpa) of LNG from Sempra LNG's portfolio of projects in North America. Additionally, the company has planned expenditure of $2.2-$2.4 billion in the greenfield and brownfield LNG developments project in Pacific and Gulf Coast.

In the past one year, shares of AES Corp have gained 33.9% compared with the industry’s growth of 9.8%. 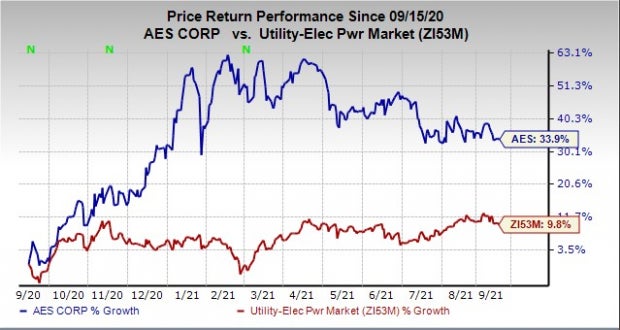