Petróleo Brasileiro S.A. or Petrobras (PBR - Free Report) announced its commitment to achieve net-zero emissions from operations and work with its partners in non-operated areas to help them lower emissions.

With the rise of Environmental, Social and Governance investing and the broad-based transition toward clean energy; a number of oil/gas companies have decided voluntarily to become carbon neutral over the next three decades.

Petrobras' net-zero target revolves around scopes 1 and 2 emissions, which involve greenhouse-gas emissions from its operations and indirect emissions associated with energy purchases from third-party suppliers. The target will be achieved in a period consistent with the Paris Climate accords.

OGCI, which constitutes about 30% of the world’s oil and gas production, will work to support the energy industry toward achieving net-zero emissions. The consortium initiated a strategy to boost the energy transition, which aims to lower methane intensity to 0.20% by 2025.

The initiative would reduce the carbon intensity from upstream operations to 17 kg CO2 per barrel of oil equivalent and bring routine flaring to zero by 2030. This could bring an additional reduction of 50 million tons of CO2 equivalent per year by 2025.

According to Petrobras’ recent five-year plan, the company committed to investing $1 billion to reduce its carbon footprint between 2021 and 2025. Over the past 11 years, the company improved its carbon efficiency in upstream activities by 47% and is currently one of the most efficient oil and gas producers in the world.

With the latest initiative, the OGCI members aim to achieve net-zero emissions and progress toward mitigating the adverse impacts of climate change.

Petrobras is the largest integrated energy firm in Brazil and one of the biggest firms in Latin America. Its activities include exploration, exploitation and the production of oil from reservoir wells, shale and other rocks. It comprises refining, processing, trading and transportation of oil and oil products, natural gas, and other fluid hydrocarbons beside other energy-related operations.

Shares of the company have outperformed the industry in the past six months. Its stock has gained 19.1% against the industry’s 13.1% decline. 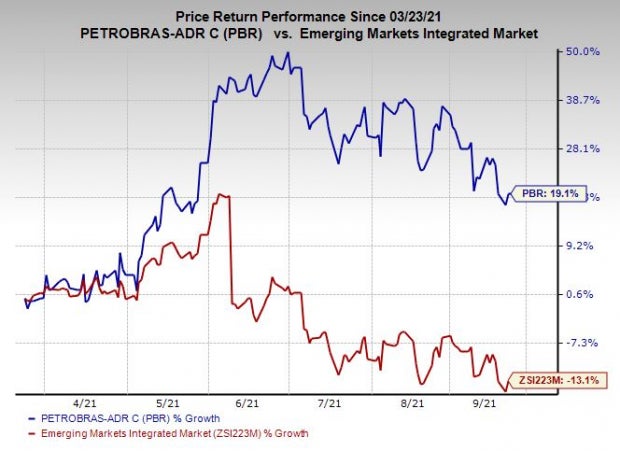