The electric vehicle (EV) revolution is accelerating, with companies leaving no stone unturned to establish a strong foothold in this domain. Consumers are demanding more electric options and manufacturers are also rising to the occasion. While EV makers are getting all charged up, countries, states, and cities are also stepping up their clean energy targets, turning the future in favor of e-mobility. The pressure for legacy automakers to make a transition from conventional fossil fuel vehicles has been mounting. In fact, last week, BMW AG and Daimler AG (DDAIF - Free Report) were sued by a German environmental group for refusing to strengthen their carbon emission goals. While the car giants have plans to shift from petrol and diesel vehicles to green modes of transportation, the plaintiffs contend their strategies are inadequate to meet the global climate targets and are of the opinion that the companies need to set more ambitious goals, including terminating the sale of fossil-fuel cars by 2030.

Rundown of the Week’s Most Important Stories

Daimler announced that it has joined forces with Stellantis and TotalEnergies in an EV battery venture in Europe to secure supplies for Mercedes-Benz. The auto biggie is set to hold a 33% interest in battery manufacturer Automotive Cells Company (ACC) — a joint venture established by Stellantis and TotalEnergies in 2020. The entire project is expected to be worth more than 7 billion euros to achieve a capacity of at least 120 gigawatt hours in Europe. By the end of the decade, Daimler’s investment in the battery facility venture is not likely to exceed $1.2 billion or 1 billion euros, starting with a mid-three-digit-million spending next year. ACC is set to commence supplying batteries for Mercedes-Benz by mid-decade.

Ford (F - Free Report) announced that it is partnering with Redwood Materials — a leading battery materials company — to make EVs more sustainable and economical for customers by building a domestic battery supply chain, creating recycling options for end-of-life vehicles, and enhancing battery production. The collaboration with Redwood will help ensure that the right infrastructure is in place to cost-effectively recycle the end-of-life Ford batteries for creating a solid pool of domestic raw materials and thus, making EVs economical. The U.S. auto giant has invested $50 million in Redwood to support the latter’s expansion in the United States.

Li Auto (LI - Free Report) lowered its third-quarter 2021 delivery guidance. The China-based EV maker now expects to deliver 24,500 vehicles in the third quarter, down from the previous projection of vehicle deliveries between 25,000 and 26,000 units. Amid heightened pandemic-induced concerns in Malaysia, the production of chips dedicated for Li Auto’s millimeter-wave radar supplier has been severely disrupted. This prompted the company to slash its delivery guidance for the third quarter. Li Auto currently carries a Zacks Rank #4 (Sell).

Volkswagen AG (VWAGY - Free Report) announced that it is commencing the construction of a production plant for battery systems in Hefei, China. The plant, named VW Anhui Components Company, will be the first of its kind to be fully owned by the China wing of the company and will begin production in second-half 2023. The Germany-based auto biggie presently operates an EV production plant together with JAC in Hefei, known as Volkswagen Anhui, and the new plant will be set up in its vicinity. The automaker plans to invest more than $164 million in the new plant by 2025. The initial capacity will be 150,000-180,000 battery systems annually for the company’s Anhui EV facility.

Blink Charging (BLNK - Free Report) made two announcements that will expand its distribution channels and ease out the access of its sustainable EV charging stations. It announced that Sourcewell, a self-sustaining government organization offering contract purchasing solutions, has awarded it with a cooperative purchasing contract in the Electric Vehicle Supply Equipment category. The purchasing contract will make its EV chargers accessible to a broad range of entities. In another development, Blink signed an agreement with the city of San Antonio to install its first publicly accessible EV charging station at the San Antonio Zoo. The deal paves way for the deployment of 202 Level 2 charging stations and three DC fast-chargers across the city.

Honda Motor (HMC - Free Report) announced that it is targeting initial annual sales of 70,000 units for the all-new electric Prologue sport utility vehicle (SUV) when it first hits the U.S. market in 2024. The Honda Prologue SUV will be the first volume battery-electric vehicle for North America. In addition to Honda Prologue, the company will also unveil an all-electric Acura SUV in 2024 in North America. Both Honda Prologue SUV and Acura SUV will utilize General Motors’ Ultium-branded EV architecture and battery system. Honda currently carries a Zacks Rank #2 (Buy). You can see the complete list of today’s Zacks #1 Rank (Strong Buy) stocks here.

General Motors (GM - Free Report) unveiled three new electric motors for Ultium-based EVs at the 2021 Mackinac Policy Conference. The motors — a 180-kilowatt front-drive motor, a 255-kW rear and front-drive motor, and a 62-kW all-wheel-drive assist motor — will power the automaker’s future EVs and debut on the 2022 GMC Hummer EV. These are designed in-house by General Motors. Additionally, the company has developed the software for Ultium Drive’s motor controllers, which, per the auto biggie, is crucial for catering to the propulsion needs of various vehicle types with a minimal set of components. This new controller is also going to be first integrated into the GMC Hummer EV. In a separate development, General Motors announced an investment of $300 million in China’s autonomous driving startup Momenta. 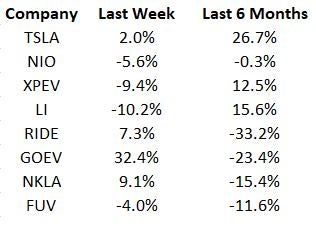 In the past six months, all stocks have decreased apart from Tesla, XPeng and Li Auto. Lordstown bore the maximum brunt, with shares declining more than 33%. The past week also displayed a mixed price trend, with Canoo registering the maximum gain.

Li Auto was the worst performer of the past week, with its shares sliding 10.2%. In fact, close peers XPeng and NIO also dipped 9.4% and 5.6%, respectively. The big dip in these companies was sparked amid fears that the highly indebted China-based real-estate developer Evergrande Group could possibly collapse, resulting in a wave of defaults in China's bloated property market.

Stay tuned for announcements of upcoming EV models and any important updates from the red-hot industry. Also, watch out for September delivery updates from NIO, Li Auto and XPeng that are set to be reported later this week.