In the past week, Delta Air Lines (DAL - Free Report) inked a deal with Aemetis (AMTX) for 250 million gallons of blended fuel containing sustainable aviation fuel, which is to be delivered over a period of 10 years. The estimated value of the agreement with the renewable fuels company is more than $1 billion. The deal is in line with the objective to reduce carbon emissions.

1. Per a Reuters report, Delta’s management said that the airline’s ticket sales stabilized and began to improve. This induces a drop in the bookings due to a spike in coronavirus cases induced by the Delta variant. The carrier now expects third-quarter 2021 revenues to fall within its initial guidance of a decline of 30-35% from the comparable period’s reading in 2019, per the report. Due to rising coronavirus cases, Delta previously estimated total adjusted revenues at the lower end of the guided range. Per the report, chief executive officer ED Bastian told reporters on the sidelines of a meeting of the airlines group IATA that "For Delta, they bottomed out in the later part of August and the first part of September.” Bastian further added, "Business traffic is growing back in the U.S." Business-travel demand persists to be rather slower in recovery than leisure-travel demand.

2. Per Alaska Airlines’ agreement with Iberia Airlines, passengers of the Spanish carrier can book travel and connect to several routes across Alaska Airlines’ network and vice versa, beginning Oct 7. Alaska Airlines customers will have easy access to international destinations in Europe, given Iberia’s existing nonstop service between Los Angeles and Madrid, and a seasonal service between San Francisco, CA and Barcelona. According to the deal, Alaska Airlines’ Mileage Plan members can earn miles on the Iberia flights. The agreement also offers reciprocal elite benefits, such as preferred seat selection; priority check-in, security clearance and boarding; lounge access and an extra baggage allowance. Iberia Airlines is a member of the oneworld alliance.

3. On the back of the improving traffic scenario, Ryanair’s September load factor (percentage of seats filled with passengers) increased to 81% from 71% in September 2020. The airline operated more than 69,500 flights last month. Despite improving from the pandemic-triggered lows, Ryanair’s traffic continues to be significantly below the pre-pandemic levels. The airline’s September 2021 traffic declined 24.8% from the comparable period’s tally in 2019.

Ryanair’s traffic in October is also expected to be high (exceeding 10.5 million) per CEO Michael O'Leary, which was mentioned in the previous week’s write up.

4. Southwest Airlines (LUV - Free Report) mandated COVID-19 vaccines for all its employees by Dec 8, 2021, in compliance with President Joe Biden’s vaccination directive for federal contractors. The Dallas-based carrier announced that its contracts with the U.S. government require the company to fully comply with the federal vaccination directive. The company informed that its employees need to be either fully vaccinated against COVID-19 or granted an exemption on religious, medical or disability grounds to continue their employment with the carrier. 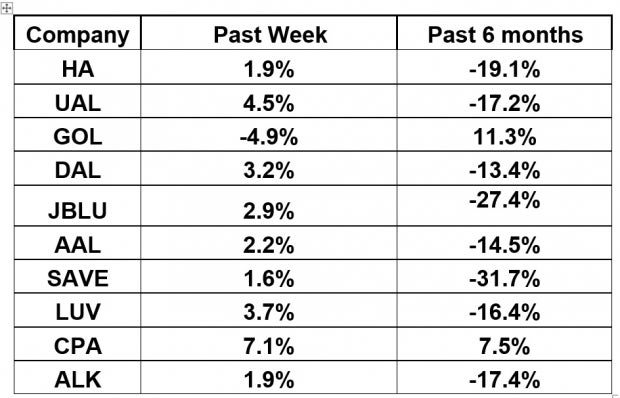 Investors will await the third-quarter 2021 earnings report of Delta Air Lines. The airline is scheduled to release September-quarter results on Oct 13.