Alright. We’ve seen a bit of upside after days of disappointment in the stock market. And of course, as is often the case, it was helped by big tech. So one question we’re probably asking ourselves is whether there’s more upside waiting to happen. Or whether we’re into a downward trend in shares.

Because while things could improve in the final months of the year, and we all hope that they do, the fact remains that there are a whole lot of challenges this year. We can’t just wish away the inflation, which is front and center of the problems we have right now, or the fact that soaring energy prices and rising input costs continue to drive it.

The energy crisis isn’t going away any time soon either. Nor are the ships standing in cue on the west coast. Nor the driver crisis in the trucking market. So inflation is going to be longer-lived than expected just a couple of months earlier.

And then there’s the debt ceiling. No matter what is decided today, debating will only serve to raise it, allowing the government to continue spending (including on more free money), which will have the effect of increasing demand and therefore contribute to incremental inflation.

On the other hand, the government can’t default, so the ceiling will have to be raised.

And as if that wasn’t enough, this earnings season is expected to be less spectacular than the last as we anniversary last year’s bounce-back.

While I have been bullish on the market through most of the year, my expectations for the rest of the year are tempered by these concerns. That’s despite the bump-up we usually get from the holiday season.

So I have been looking for stocks that appear to be losing steam because now’s as good a time as any to take some profits. Because just in case market reaction to earnings is more positive than currently expected, that cash could be put to use quickly.

I’ve partly relied on the Zacks stock ranking system, the direction of price movement, as well as the direction estimates are moving-

As more companies increasingly set up offices in the sun belt, the demand for rental accommodation in the region has increased. This has led to great opportunities for companies like Bluerock.

The Zacks Rank #4 (Sell) company is highly leveraged with a debt-cap ratio of 74% and 79% of its shareholders equity in preferred stock. So it is has a lot of payments to make. And despite the increase in the average occupancy and rental rates this year, that improved operating profits and margins, Earnings Before Interest, Taxes, Depreciation and Amortization for Real Estate (“EBITDAre”) declined.

Management recently decided to consider its options including a sale of the company or its recapitalization, which sent its shares up. In fact, the shares had a roller coaster ride this year, but since this announcement last month, they have shot up. It doesn’t look like the shares have much more room to run, so it’s probably a good idea to offload them now.

The company’s estimates have also edged lower in the last 60 days and while it does have a good history of positive surprises, the price response hasn’t been too exciting.

In September, the company decided to divest its Hardware & Home Improvement (HHI) segment to Swedish lock maker ASSA ABLOY in a cash deal worth $4.3 billion. The proceeds from the sale of this fast-growing business were intended to pay down its debt (debt-cap ratio is quite high at 63.9%) and strengthen its balance sheet. The HHI segment, which includes security, plumbing and hardware products, accounts for a third of its revenues.

This comes at a time when the Zacks Rank #5 (Strong Sell) company is also seeing increased inflationary pressures from higher transportation and commodity costs.

The shares shot up after the divestiture announcement and are now trading at a P/E multiple that’s very close to their annual high. It doesn’t look like there’s further upside potential at the moment.

Also, while prices do appear to be positively correlated with earnings surprises, both positive and negative, the response is usually muted. So there shouldn’t be a major impact on prices, even if the company manages a positive surprise.

The shares have responded positively to both the earnings announcement in July and the public offering of 2,300,000 shares of its common stock. The proceeds from the shares will be used for the repayment or redemption of outstanding debt, or share repurchases, or investments in the Bank, as regulatory capital or otherwise, ongoing operations, interest and dividend payments and possible acquisitions of businesses or assets.

As a result, shares of this Zacks Rank #5 company have appreciated 43.4% in the last three months. However, it appears that they are treading water right now. 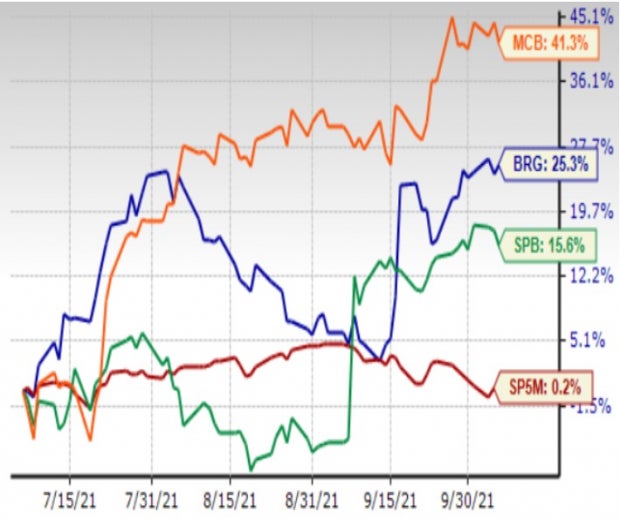 Why You Should Add Univar (UNVR) Stock to Your Portfolio Now