Bank of America (BAC - Free Report) is now planning to apply for setting up a securities firm in China, almost a year after China’s $53-trillion financial markets became open to foreign firms, following the removal of restrictions on ownership. The news was first reported by Bloomberg, citing people familiar with the matter.

The bank is expected to seek regulatory approval in early 2022 and will likely submit applications for licenses, allowing it to trade and underwrite stocks and bonds, among other things.

As part of its four-year investment plan in the country, JPMorgan has decided to get full ownership of all of its mainland China operations by the end of this year.

Many global firms have been rushing to capitalize on the opportunity that China has been providing. Last month, Goldman Sachs (GS - Free Report) also received approval from China regulators to take complete control of its mainland securities business.

Firms like Nomura Holdings, Morgan Stanley (MS - Free Report) and UBS Group have either won approval or are waiting for the same to increase stakes in their respective JVs in China.

China is the second-largest equity market globally and is one of the broadest as well as the deepest growth markets outside the United States. Such partnerships will enhance the global banks’ ability to cover securities locally and seize profit-generating opportunities in the China market for their clients.

Notably, in July, China said that it would further relax rules for foreign banks and insurance companies in a bid to attract more foreign investment and hence shore up its economy.

Bank of America’s continued efforts to improve revenues, its strong balance sheet, and its expansion efforts into new markets are expected to continue to aid growth. The company’s technological advancements will keep supporting cross-selling opportunities.

Over the past six months, shares of the company have gained 16.8% compared with 9.8% growth recorded by the industry. 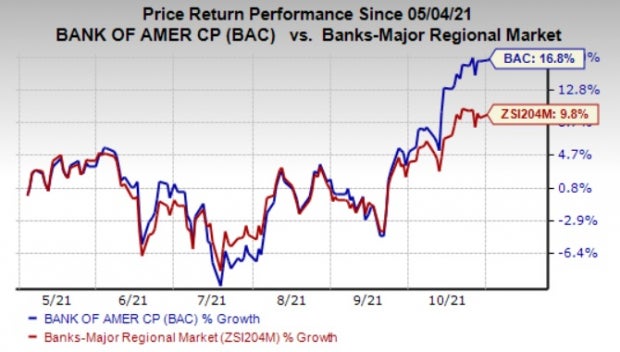