On its fiscal 2021 fourth-quarter earnings call in September, Aurora Cannabis confirmed that it had won three tender lots in France, which included all available dry flower lots. The company had delivered its first shipment in August and confirmed delivering an $8 million cannabis shipment in July in Israel as part of the company’s supply agreement with Cantek Global Ltd. These activities are likely to have significantly boosted the company’s fiscal 2022 first-quarter revenues.

Over the past few months, the company has been registering growth in the Canadian adult-recreational segment, which management believes to have resulted from its focus on superior quality as well as potency and higher-margin products. This trend is likely to have continued in the fiscal first quarter as well thereby, driving up Aurora Cannabis’ revenues. 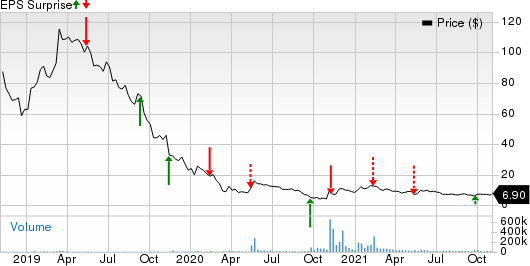 Further, new store openings and rising consumer demand are likely to have driven revenues in the adult-recreational segment.

During the last-reported quarter, the company recorded growth in its San Rafael '71 cannabis brand. This trend is likely to have continued in the to-be-reported quarter due to the introduction of additional premium products and Aurora Cannabis’ focus on innovation throughout all categories. We are also hopeful of a continued recovery in the company’s international medical revenues, which have been improving over the past few months due to a favorable country mix.

In June, Aurora Cannabis had launched three new proprietary cultivars under its premium adult-use cannabis brand San Rafael '71 — Stonefruit Sunset, Lemon Rocket and Driftwood Diesel. Revenues from the sale of these are likely to have contributed to the company’s to-be-reported quarter’s top line.

For first-quarter fiscal 2022, the Zacks Consensus Estimate of $48.9 million for total revenues implies a decline of 3.9% from the prior-year quarter’s reported figure.

The consensus estimate for the bottom line is pegged at a loss of 18 cents per share, indicating an improvement of 71.9% from the prior-year period’s reported number.

Per our proven model, a stock with a Zacks Rank #1 (Strong Buy), 2 (Buy) or 3 (Hold) along with a positive Earnings ESP has higher chances of beating estimates. However, this is not the case here.

Earnings ESP: Aurora Cannabis has an Earnings ESP of 0.00%. You can uncover the best stocks to buy or sell before they’re reported with our Earnings ESP Filter.

Here are a few medical stocks worth considering as these have the right combination of elements to beat on earnings this reporting cycle.

Insulet Corporation (PODD - Free Report) has an Earnings ESP of +15.79% and a Zacks Rank of 2. You can see the complete list of today’s Zacks #1 Rank stocks here.