Albemarle Corporation (ALB - Free Report) slipped to a net loss of $392.8 million or $3.36 per share in the third quarter of 2021 from a profit of $98.3 million or 92 cents per share a year ago. The loss was attributed to the recent arbitration decision on a dispute regarding Huntsman Corporation's acquisition of Rockwood's Pigments & Additives business in 2014.

Adjusted earnings in the reported quarter were $1.05 per share, down from $1.09 a year ago. The bottom line topped the Zacks Consensus Estimate of 75 cents.

Revenues rose roughly 11.2% year over year to $830.6 million in the quarter and topped the Zacks Consensus Estimate of $775.6 million. The top line was aided by higher sales from the company's Lithium and Bromine business segments.

The Bromine Specialties segment recorded sales of $277.8 million, up around 17.1% year over year. Sales were supported by strong pricing and favorable currency. Prices were driven by high demand across the product portfolio and tightening of the market. Adjusted EBITDA was $86 million, up around 8.3% year over year led by higher sales, offset by higher raw material and freight costs.

The Catalysts unit recorded revenues of $193.6 million in the reported quarter, down around 2.2% year over year, hurt by lower volumes (down 1%), pricing and unfavorable currency translation. Adjusted EBITDA was $33.1 million, down roughly 12.5% year over year due to lower sales, partly offset by higher-than-expected equity income.

Moving ahead, Albemarle expects its performance for full-year 2021 to improve modestly on a year-over-year basis on a sustained recovery in global economic activities.

The company expects net sales for 2021 to be between $3.3 billion and $3.4 billion. It sees higher Lithium sales. However, volumes for the Bromine business are expected to be affected by sold-out conditions and the lack of inventory. Higher freight and raw material costs are likely to partially offset the cost saving and higher pricing initiatives in the segment. For the catalysts segment, volumes are not expected to return to the pre-pandemic levels before late 2022 or 2023. 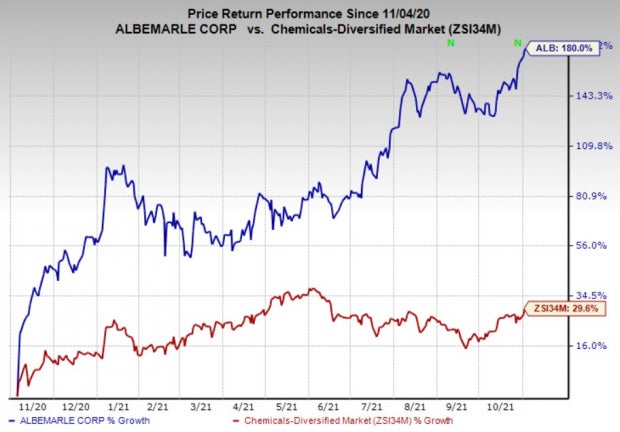 Methanex has a projected earnings growth rate of 429% for the current year. The company’s shares have jumped 51.7% over a year.

Olin has a projected earnings growth rate of 740% for the current year. The company’s shares have grown 229.3% over a year.

Arkema has a projected earnings growth rate of 88.7% for the current year. The company’s shares have surged 110.3% over a year.