Emergent BioSolutions Inc. (EBS - Free Report) announced that it has dosed the first participant in a phase I study evaluating its investigational universal influenza vaccine candidate, EBS-UFV-001. The study is being sponsored by Emergent and conducted in Australia.

The current version of this influenza vaccine candidate has multiple components intended to prompt broad and supra-seasonal immunity against influenza A viruses.

The double-blind, placebo-controlled dose-escalation study will evaluate the safety, tolerability, and immunogenicity of EBS-UFV-001 at two dose levels and two schedules in healthy adults aged between 18 to 45 years. The company’s universal influenza vaccine candidate is based on a nanoparticle vaccine.

Shares of Emergent have plunged 52.5% so far this year compared with the industry’s decline of 20.3%. 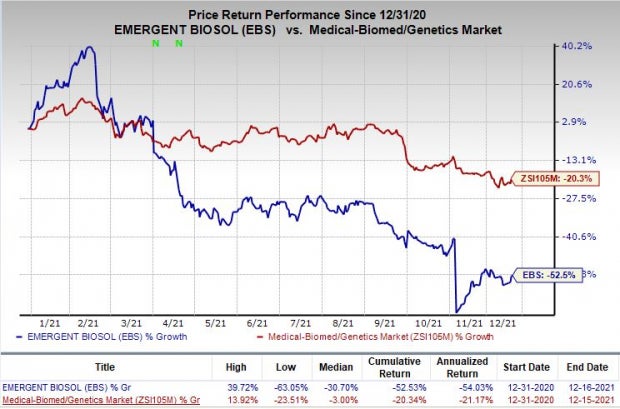 Per the company, influenza A and B viruses cause seasonal epidemics of disease, which can lead to severe illness or death especially in a high-risk population. Hence, if successfully developed and upon potential approval, the influenza vaccine can offer protection to millions who are affected by the disease every year.

Please note that several other companies are engaged in developing influenza vaccine candidates, which can induce stiff competition to Emergent.

mRNA-1010 is Moderna’s first seasonal influenza vaccine candidate, which has entered clinical testing for the prevention of influenza, including seasonal influenza A H1N1, H3N2 and influenza B Yamagata and Victoria. Moderna will soon begin mid-stage studies on mRNA-1010.

If approved, Novavax believes that NanoFlu will be a game-changer for the prevention of influenza.

Emergent currently carries a Zacks Rank #3 (Hold). A better-ranked stock in the biotech sector is Sarepta Therapeutics, Inc. (SRPT - Free Report) , which has a Zacks Rank #2 (Buy) at present. You can see the complete list of today’s Zacks #1 Rank (Strong Buy) stocks here.

Earnings of Sarepta Therapeutics surpassed estimates in two of the trailing four quarters and missed the same on the other two occasions.