The regulatory body also approved the new drug application (“NDA”) for Oxbryta tablets for oral suspension – a new dispersible, once-daily tablet dosage for patients aged four to less than 12 years, as well as for older patients who have difficulty swallowing whole tablets.

Oxbryta is currently approved by the FDA as an oral, once-daily treatment for SCD in patients aged 12 years or above.

The FDA nod for the sNDA was based on data from the phase IIa HOPE-KIDS 1 study, which evaluated Oxbryta in the given patient population. Data from the same showed that weight-based treatment with the dispersible tablet formulation of Oxbryta led to rapid and sustained improvements in hemoglobin. Concurrent reduction of hemolysis or red blood cell destruction was also demonstrated in the study.

Shares of Global Blood have plunged 29.5% so far this year compared with industry’s decrease of 19%. 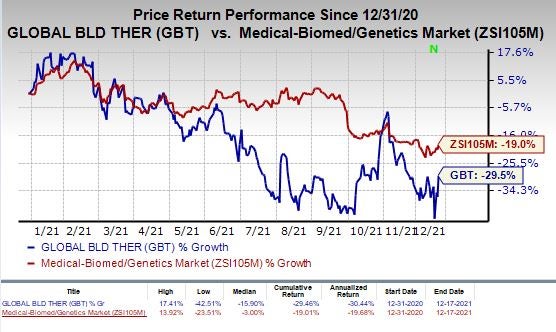 Please note that, in September 2021, the FDA accepted and granted priority review to the sNDA as well as the NDA for Oxbryta. A decision from the regulatory body was expected on Dec 25, 2021. Hence, the above approval comes slightly before the scheduled time.

Oxbryta is currently the only marketed drug in Global Blood’s portfolio. In the first nine months of 2021, Oxbryta generated sales worth $138.6 million.

In a separate press release, Global Blood announced that the that the European Medicines Agency’s Committee for Medicinal Products for Human Use has rendered a positive opinion on, and has recommended marketing authorization to Oxbryta as a monotherapy or in combination with hydroxycarbamide (hydroxyurea) for the treatment of hemolytic anemia due to SCD in adults and pediatric patients aged 12 years and above.

A decision from the European Commission is expected in the first quarter of 2022. A potential nod in the EU is likely to boost Oxbryta sales in the days ahead.

Editas Medicine’s earnings have surpassed estimates in two of the trailing four quarters and missed the same on the other two occasions.