Here's Why You Should Hold on to Western Union (WU) Now

The stock has lost 18% in a year compared with the industry’s and the Business Services sector’s decline of 18.9% and 25.4%, respectively. The S&P 500 composite has risen 27% in the said time frame. 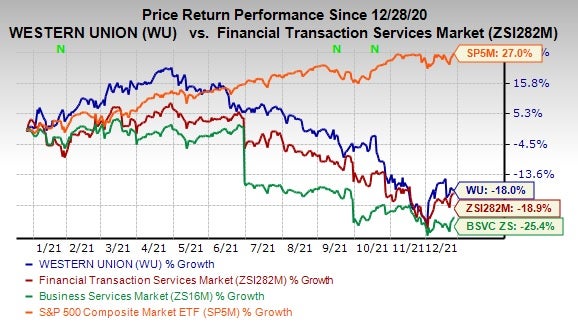 WU is positioned well for progress, evident from its VGM Score of A. Here V stands for Value, G for Growth and M for Momentum, with the score being a weighted combination of all three factors.

The Zacks Consensus Estimate for Western Union’s 2022 earnings suggests growth of 8.2% from the year-ago reported figure, while the same for revenues indicates an improvement of 2.8%.

WU’s earnings beat estimates in three of the trailing four quarters and missed once, the average surprise being 3.92%.

The ROE of Western Union for the trailing 12 months is 311%, which remains way higher than the industry average of 29.4%. This reflects WU’s efficiency in utilizing its shareholders’ funds.

Western Union has a solid 2021 guidance in place. Adjusted earnings per share is estimated between $2.05 and $2.10, the mid-point of which reflects improvement of 11% from the 2020-end reported figure. The mid-point lies lower than the Zacks Consensus Estimate of $2.08 per share.

On a constant currency (cc) basis, WU anticipates approximate revenue growth of 3-4% in 2021. The projection for the metric compares favorably with the year-ago decline of 3% in revenues on a cc basis.

Western Union, which was once a completely brick-and-mortar money transfer company, now boasts of a solid digital arm. A combination of massive investments and digital partnerships resulted jn a robust digital arm, which has generated solid digital revenues. Thus, Western Union forecasts digital money transfer revenues to cross the $1-billion mark in 2021. This indicates an improvement from the 2020 figure, wherein the metric crossed the $850 million mark.

In a bid to digitize the money movement process for consumers and businesses, WU has been collaborating with several renowned global and regional financial service providers. These efforts have upgraded its digital capabilities and, paved the way for enhanced management of international payments and strengthened global presence. Some of the recent tie-ups undertaken by Western Union for easing digital money transfers include those with Mastercard and Metrobank.

Western Union has undertaken divestitures aimed at streamlining business operations and intensifying focus on its core business areas. In August 2021, the company inked a deal to sell its Business Solutions segment thereby reflecting WU’s primary motive of diverting all efforts to bolster the global cross-border payments platform. Additionally, WU has been pursuing several cost-cutting initiatives, which are expected to boost the company’s margins in the days ahead.

A strong cash position and robust cash-generating abilities enable Western Union to pursue significant business investments and tactical capital-deployment moves via share buybacks and dividend payments. Its dividend yield of 5.3% remains higher than the industry’s figure of 0.6%. Also, WU’s leverage ratio has been improving over the past four years.

Black Knight’s earnings surpassed estimates in each of the last four quarters, the average surprise being 6.94%. The Zacks Consensus Estimate for BKI’s 2022 earnings implies 14.2% growth from the year-ago reported figure. The consensus mark has also moved north by 0.4% in the past 30 days. Black Knight has a Momentum Score of A.

The bottom line of Avis Budget surpassed estimates in each of the trailing four quarters, the average surprise being 76.85%. The consensus mark for CAR’s 2022 earnings has moved north by 13.3% in the past 30 days. Avis Budget boasts of a VGM Score of A.

FTI Consulting’s earnings outpaced estimates in each of the last four quarters, the average being 41.75%. The Zacks Consensus Estimate for FCN’s 2022 earnings suggests 9.8% improvement from the year-ago reported figure. The consensus mark has moved north by 0.4% in the past 60 days. FTI Consulting has a VGM Score of B.

4 Cybersecurity Stocks to Watch Out For in 2022