The year 2021 has been good for banks in general. Despite the lingering concerns related to the impact of the coronavirus pandemic, bank stocks performed quite well this year. The performance of banks was mainly supported by solid fee income growth and reserve releases. While near-zero interest rates (the Federal Reserve had reduced benchmark rates to near zero in March 2020) put some pressure on banks’ margin growth, the decent rise in loan demand along with a steeper yield curve positively impacted interest income to some extent.

We know that banks thrive in a rising rate environment. But, small-cap banks tend to benefit from accommodative monetary policies like lower interest rates, as it makes it easier for such firms to borrow for expansion and keeping their businesses afloat during tough times. Also, small-cap banks benefit from fiscal stimulus packages since these are more sensitive to consumer spending and market sentiments. A recovering economy means that unemployment rates are falling, which helps banks record strong earnings growth. Thus, small-cap bank stocks, which have the potential to provide greater returns than the traditional large banks because of their low prices, are in an advantageous position when the U.S. economy is expanding faster.

The three short-listed banks have seen their share prices surging more than 50% so far this year. Also, these banks have witnessed positive earnings estimate revision of 2% or more over the past 30 days for 2022.

The chart below shows the year-to-date price performance of the three banks. 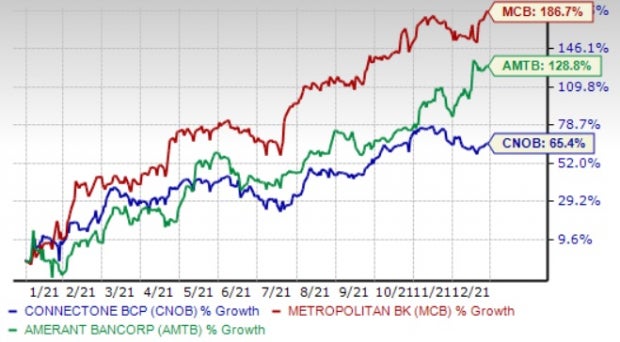 Amerant Bancorp: Founded in 1979 and formerly known as Mercantil Bank Holding Corporation, Amerant Bancorp is headquartered in Coral Gables, FL. The bank has a market cap of $1.30 billion. It is the second-largest community bank in Florida, and as of Sep 30, 2021, it operated 25 banking centers.

Amerant Bancorp continues to better align its operating structure and resources with its business activities. In view of this, it decided to cease the origination of loans in New York and has closed its New York City loan production office. Over the past five years (2016-2020), total loans have witnessed a CAGR of 0.3%. As of Sep 30, 2021, the company had cash and cash equivalents worth $166.2 million, total assets worth $7.49 billion, deposits of $5.36 billion and shareholders’ equity of $812.7 million.

AMTB announced “its intention to effect a clean-up merger, subject to shareholder approval, pursuant to which a wholly-owned newly formed subsidiary, incorporated with the only purpose of effecting the clean-up merger, will merge with and into the Company.” Following the merger, none of the Class B common shares will be outstanding. The total outstanding shares will also decline.

Notably, the Zacks Consensus Estimate for AMTB’s 2022 earnings has been revised 3.1% upward over the past 30 days, reflecting analysts’ bullish stance regarding its earnings growth potential.

The bank is also an active issuer of debit cards for third-party debit card programs and provides critical global payments infrastructure to its fintech partners. Metropolitan Bank’s strategic priorities are to fortify its position as a leader in global and digital payments settlement. Also, it aims to become a domineering financial infrastructure for select fintechs to access its global payments settlement platform.

Total cash and cash equivalents aggregated to $1.86 billion as of Sep 30, 2021, while secured borrowings stood at $35.6 million. MCB’s endeavors to efficiently deploy the capital generated from its deposits and anticipation of a gradual rise in loan demand will likely bolster revenue growth despite lower rates. The company’s 2022 earnings estimates have been revised upward by 7.1% over the past 30 days.

ConnectOne Bancorp: Headquartered in Englewood Cliffs, NJ, ConnectOne Bancorp has a market cap of $1.30 billion. ConnectOne Bancorp is a modern financial services company that operates through its primary subsidiary along with its fintech subsidiary, BoeFly (a fintech marketplace that connects borrowers in the franchise space with funding solutions through a network of partner banks). Over the past 30 days, the company’s 2022 earnings estimates have increased 2.7%.

Supported by a solid capital and liquidity position, ConnectOne Bancorp is well poised to enhance shareholder value through efficient capital deployments. Along with third-quarter 2021 results, the company announced a cash dividend of 13 cents per share, representing a hike of 18% from the prior payout. This represents the second dividend hike of 2 cents per share in 2021. Also, as of Sep 30, 2021, the company had 315,000 shares remaining under its buyback authorization. Moreover, the board has authorized the repurchase of up to an additional 2 million shares.

Ride The Cannabis Legalization Wave With These 3 Stocks