Taiwan Semi (TSM) Strength a Positive for These 3 Stocks

Taiwan Semiconductor (TSM - Free Report) reported very strong sales for December, ahead of its fourth-quarter report on Thursday. And the 32.4% growth is the strongest since 2016, according to data on its website. December sales of NT$155.4 was also a record.

Zacks Rank #3 (Hold)-ranked Taiwan Semiconductor counts Apple as one of its major customers, so the numbers also indicate strong uptake from iPhones. TSM is also a major supplier of HPC chips, which could mean strength at AMD and NVIDIA, both of which use it as a fabrication partner.

Taiwan Semiconductor is also a leading supplier into the automotive market, which remains chip-constrained. But even in a market that’s not ridden by shortages, TSM will continue to play a major role. And that is because 80% of automotive innovation today is tied to the electronic components that it is so good at manufacturing.

Additionally, the very high demand means that Taiwan Semiconductor is running at high utilization rates. And high capacity utilization for a capacity incentive business means that there’s more value flowing down to the bottom line.

Despite a greater focus on services, Apple’s iPhone remains its star product, increasing 47% in the last-reported quarter for a 47% revenue share. Apple gets a lot of its iPhone chips from Taiwan Semiconductor, and TSM’s strong results indicate that the momentum has continued in the December quarter. Additionally, Macs and iPads are gaining ground at enterprise customers. And wearables, particularly the Watch, is seeing increasing penetration.

Apple has complained of supply chain issues that is plaguing the whole electronics food chain and it had a sizeable impact on its results in the last quarter. While these issues are likely to remain, Apple looks poised to report a strong quarter on Jan 27.

Apple hasn’t provided guidance because of these uncertainties, but its #2 (Buy) rank and earnings expected surprise prediction (ESP) of +1.68% are indicative of a positive surprise.

Analysts currently expect the company to grow revenue and earnings by a respective 5.3% and 3.7% in the current fiscal year ending September, followed by incremental growth the following year. Estimates for both years have been moving up in the last 60 days.

Innovation is at the root of AMD’s success. Just a few days ago, the company launched several major new products. CEO Lisa Su talked about strong momentum in the business with the opportunity to drive workload optimization in the new normal where computing needs have grown and become far more distributed. While she sees the supply chain issues in the PC market taking some more time to straighten out, AMD has the potential for share gains in the segment.

So whether it’s supercomputing, cloud, gaming, data center, or simply PCs, AMD is going great guns. The 2021 guidance was also raised at the end of the last quarter. If anyone had any doubts, Taiwan Semiconductor’s strong showing is likely to put those to rest.

AMD’s Zacks Rank #2 and earnings ESP of +3.77% are indicative of an earnings surprise when it reports on Jan 25.

Analysts currently expect AMD to grow its 2021 revenue and earnings by a respective 65.2% and 105.4%. Both numbers are expected to grow by strong double-digits the following year. Estimates for bot years have edged up in the last 60 days.

NVIDIA is one of those chip stocks that are at the forefront of technology driving the new normal. So it continues to benefit from all the things that are encouraging us to lead more digital lives, whether it is a matter of working, learning, shopping or entertaining in the home or choosing electrified or automated vehicles to drive.

What’s more, its HPC chips are also in the back-end of many of these activities, allowing the data enter to function optimally. So yes, since it is a major Taiwan Semiconductor customer, TSM’s results can be considered to have positive implications for NVIDIA’s business. And of course, since it’s not immune to the supply chain issues impacting the  others, there’s likely to be a negative impact from that as well when it reports on Feb 23.

In the meantime, its Zacks #1 (Strong Buy) rank and ESP of 0.0% are indicative of a positive surprise.

Analysts are currently looking for revenue growth of 60.1% and earnings growth of 73.2% in the current fiscal year ending in January followed by strong double-digit growth in both numbers next year. Its estimates have improved substantially in the last 60 days.

We are just about entering earnings season now and there are more uncertainties this time round given all that is going on in the economy. But semiconductors are not things to shy away from. These are behind the entire digital economy, so they have to sell well for us to succeed at anything.

To that extent, the semiconductor segment is one where demand is seemingly endless or relatively inelastic (whichever way you want to think about it). On the other hand, supply is in an interesting position where we have limited capacity at the moment. Usually, the industry is considered cyclical because once you’ve built capacity, it takes time to fill up and get efficient, which leads to oversupply situations.

Sometimes, as we’ve seen in the last cycle, demand is so strong that capacity fills up very quickly and so there appears to be an extension of the cycle. If Lisa Su’s reading the situation right, we could be in this kind of a “new normal” right now. 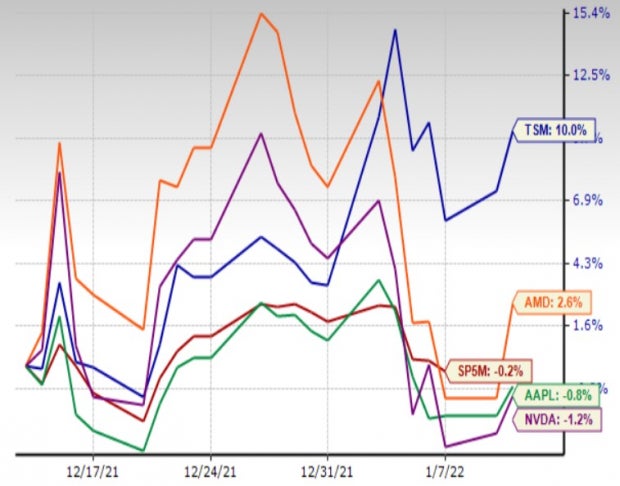 3 Shipping Stocks to Grace Your Portfolio in 2022