Inogen, Inc. (INGN - Free Report) recently announced preliminary revenues for fourth-quarter and full-year 2021 on Jan 10. Following this release, shares of the company are up 5.3% till the last trading.

As per the preliminary report, fourth-quarter 2021 revenues are estimated to be $75.9-$76.9 million, up 2.6-3.9% on a year-over-year basis. However, for comparison purposes, Inogen is considering the mid-point of $76.4 million for the quarter, up 3.3% year over year. The Zacks Consensus Estimate of $75.1 million remains below the preliminary figure.

Per Inogen, this revenue uptick resulted from improved average selling prices, sustained demand, and the reduced impact of the COVID-19 pandemic and the related public health emergency. However, this was partially offset by supply chain constraints limiting product availability, especially in its domestic business-to-business channels.

Inogen’s direct-to-consumer sales are expected to be $33 million in the fourth quarter of 2021, reflecting an increase of 23.3% from the prior-year period, primarily on the back of higher average selling prices. Inside sales representative productivity improved in the quarter despite slightly lower average inside sales representative headcount, which was down approximately 3% year over year.

Domestic business-to-business sales are expected to be $10.3 million in the to-be-reported quarter of 2021, down 57.4% year over year, primarily due to supply chain constraints.

International business-to-business sales are expected to be $20.1 million in the fourth quarter of 2021, up 47.8% year over year. The increase was primarily driven by increased ambulation of patients in Europe and improving operational capacity of certain European respiratory assessment centers closer to normal levels. This resulted from increasing COVID-19 vaccination rates, enabling patients to return to more normalized activity levels and seek treatments. However, these improvements were partially offset by supply chain constraints.

Rental revenues in the fourth quarter of 2021 are expected to be $13 million, up 38.3% year over year, primarily resulting from increased patients on service, higher billable patients as a percent of total patients on service and higher Medicare reimbursement rates.

Inogen’s total physician sales representative headcount was 35 as of Dec 31, 2021, reflecting an increase of 46% from the prior-year period. Per the company, it has made notable progress on its physician sales representative headcount expansion via its agreement with Ashfield Healthcare, LLC. Further updates on its progress will be provided by Inogen at its fourth-quarter 2021 earnings call.

However, management’s expectation of a continued supply-chain disruption resulting from the chip shortage remains a concern. Inogen has temporarily suspended manufacturing operations, effective Jan 3, 2022, at its Texas and California locations due to chip shortages as of late December 2021. The company has asked Foxconn (its Czech Republic-based OEM) to suspend manufacturing temporarily due to the supply constraints. These activities raise apprehensions on the stock. 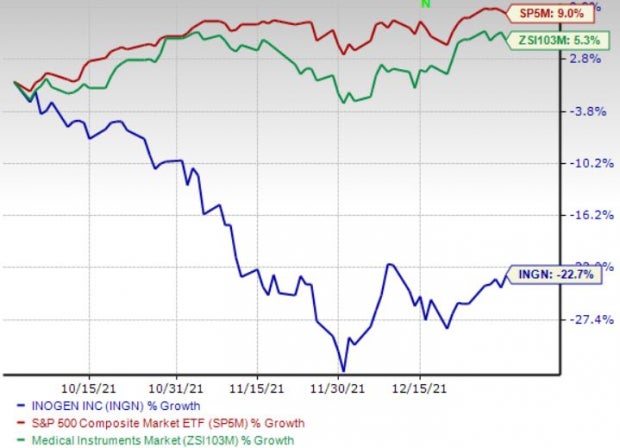 Should You Retain Axis Capital (AXS) Stock in Your Portfolio?