The company expects fiscal first-quarter revenues between $840 million and $850 million, suggesting 12% year-over-year growth at the midpoint but lower than the previous expectation of $870 million to $910 million.

The company blamed two specific types of supply-chain disruptions, which occurred toward the tail end of the quarter, for the revenue guidance slash. The first involved a last-minute delay in delivering key components from a few suppliers. The second pertained to a third-party manufacturing disruption causing a brief manufacturing hiccup. These events coupled with a surge in Omicron cases worsened the situation, making it difficult for the company to navigate these challenges. Nonetheless, the company’s management notes that it does not expect these incidents to be repeated in the future.

The company does not expect lead times for crucial components to improve for the rest of this year. To counter this challenge, the company has increased its component purchases, inventory levels and manufacturing capability– an action it believes will fully materialize in the second half of fiscal year 2022.

The company also emphasized that the revenue guidance cut has nothing to do with demand for its products and services, which continues to be at unprecedented levels, as underscored by extraordinary order growth and the accelerated cloud adoption and traffic growth. In fact, the company’s management noted that orders for the year will likely be higher than forecasted. These factors provide the company with exceptional growth visibility for the fiscal year 2022 and it expects to achieve its revenue guidance of 11% to 13% growth for the year.

However, these projected results are based on preliminary information and are subject to change following the completion of the quarter-end accounting review. Additionally, the company will release the comprehensive financial statements for the fiscal first quarter on Mar 7.

Headquartered in Hanover, MD, Ciena is a leading provider of optical networking equipment, software and services. The company is benefiting from increased network traffic, demand for bandwidth and the adoption of cloud architecture. Ciena’s focus on aiding carriers’ transition to next-generation networks places it in one of the fastest-growing segments of the telecom space.

Last month, Ciena announced that its coherent optical solutions are being used by India-based Vodafone Idea Limited (VIL or Vi) as the telecom operator overhauls its network backbone scalability in the country. Vi uses Ciena’s 6500 packet-optical platform that runs on WaveLogic 5 Extreme solution for high-speed 300G/400G services, which can be upgraded to 800G. Using Ciena’s fifth-generation coherent optical solutions, Vi will be able to implement an advanced network to support upcoming technologies like cloud, Internet of Things and 5G.

Prior to that, Ciena partnered with Gulf Bridge International to boost the latter’s Smart Network capacity and performance on the back of its WaveLogic 5 Extreme-powered GeoMesh Extreme solution. This will improve the capacity of GBI’s Smart Network by 10 Tb/s across its regional and global network.

Shares of Ciena have rallied 24.1% in the past year compared with the industry’s rise of 15.4%. 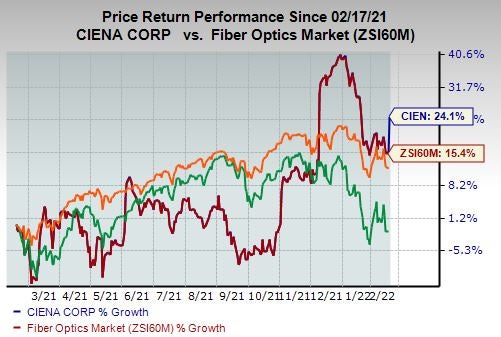 Progress Software’s earnings beat the Zacks Consensus Estimate in the preceding four quarters, the average surprise being 26.8%. Shares of PRGS have rallied 2.6% in the past year.

Badger Meter has a projected earnings growth rate of 5.77% for 2022. The Zacks Consensus Estimate for Badger Meter’s 2022 earnings has been revised upward by 19 cents in the past 60 days.

Badger Meter’s earnings beat the Zacks Consensus Estimate in each of the last four quarters, the average surprise being 14%. Shares of BMI have dropped 1% in the past year.

Cadence’s earnings beat the Zacks Consensus Estimate in each of the last four quarters, the average surprise being 11%. Shares of CDNS have rallied 3% in the past year.