Why Should You Steer Clear of AMERISAFE (AMSF) Right Now?

Over the past 30 days, the stock has witnessed its 2022 and 2023 earnings estimates move 19.3% and 18.5% south, respectively, year over year. This is indicative of brokers’ pessimism on the stock. 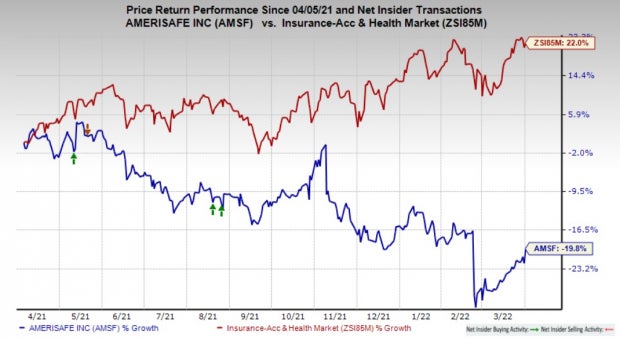 In the last reported quarter, its results were impacted by declining rates that induced poor net premiums earned. Escalating costs are another reason. Total expenses of $76.4 million rose 45.3% year over year due to higher loss and loss adjustment expenses incurred as well as increased underwriting and other operating costs.

Its revenues have decreased since 2015 sans 2018. In 2021, its top line fell 6.9% year over year due to lower net premiums earned, which declined 9.3% from the prior-year’s reading. Its revenues will remain under pressure going forward as well due to concentration in workers’ compensation insurance line.

Investment income contributes to AMSF’s net income. Though AMERISAFE consistently increased its investment income until 2019, the same declined 9.6% and 13.4% on a year-over-year basis during 2020 and 2021, respectively. This was mainly due to weak investment yields on fixed-income securities.

Its investment income is supposed to remain stressed due to the low-interest rate environment.

AMSF is exposed to product concentration, which continues to bother the company. Moreover, premium rates in the workers’ compensation market have remained soft over the quarters, which have been hurting its premium growth.

The consensus mark for 2022 earnings indicates a downside of 18.44% while the same for revenues implies a slip of 4.23% from the corresponding year-ago reported figures.

Horace Mann’s earnings surpassed estimates in each of the last four quarters, the average being 22.80%. The Zacks Consensus Estimate for HMN’s 2022 earnings suggests an improvement of 1.1%, while the same for revenues suggests growth of 1% from the respective year-ago reported figures. The consensus mark for Horace Mann's 2022 earnings has moved 8.4% north in the past 60 days.

Berkshire Hathaway’s earnings surpassed estimates in three of the trailing four quarters (missing the mark in one), the average surprise being 11.86%. The Zacks Consensus Estimate for BRK.B’s 2022 earnings suggests an improvement of 6.1% from the year-ago reported figure.

Arch Capital Group and Berkshire Hathaway’s stocks have gained 22.7% and 34%, respectively, in a year, while shares of Horace Mann have lost 2.8%.

3 Transportation Stocks to Bet on Before Q1 Earnings Release