team.blue is a leading digital enabler for companies and entrepreneurs, empowering them with innovative digital services. The company’s product portfolio provides growth opportunities to small and medium enterprises across 15 European markets, enabling them to achieve online success more easily. It serves over 2.5 million customers in Europe and has a team of more than 1,700 experts to support them.

Amid this scenario, team.blue needed a solution that was powerful, easy to use, stable and extremely efficient in terms of power and size. Ciena’s Waveserver Ai platform met all these requirements, thereby augmenting the capabilities of team.blue’s current dark fiber infrastructure.

For team.blue, adopting the Waveserver Ai platform will also enable the creation of a point-to-point network between sites, currently providing up to 8x100G on a single dark fiber. This can be further scaled up by the company if needed. This will eventually allow the company to improve its cloud and network offerings, thereby delivering cutting-edge services to customers.

Headquartered in Hanover, MD, Ciena is a leading provider of optical networking equipment, software and services. The company is benefiting from increased network traffic, demand for bandwidth and the adoption of cloud architecture. Ciena’s focus on aiding carriers’ transition to next-generation networks places it in one of the fastest-growing segments of the telecom space.

Last month, Ciena announced that The Eastern Africa Submarine Cable System or EASSy is deploying the company’s GeoMesh Extreme solution to boost the capacity of its submarine cable system to meet the increasing demand and improve connectivity to the Americas, the Middle East, Europe and Southeast Asia. EASSy’s submarine system extends from Africa’s east to south coast for about 10,000 kilometers.

Prior to that, Ciena announced that its coherent optical solutions are being used by India-based Vodafone Idea Limited (VIL or Vi) as the telecom operator overhauls its network backbone scalability in the country. Vi uses Ciena’s 6500 packet-optical platform that runs on WaveLogic 5 Extreme solution for high-speed 300G/400G services, which can be upgraded to 800G. Using Ciena’s fifth-generation coherent optical solutions, Vi will be able to implement an advanced network to support upcoming technologies like cloud, Internet of Things and 5G.

Shares of CIEN have rallied 0.8% in the past year compared with the industry’s rise of 2.1%. 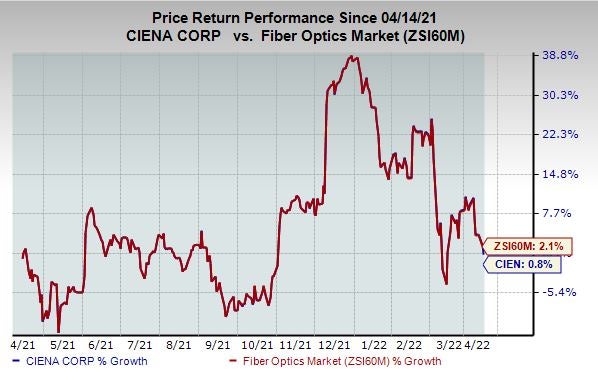 Tech Stocks to Tap On

Bel Fuse has a projected earnings growth rate of 3.65% for 2023. The Zacks Consensus Estimate for Bel Fuse’s 2023 earnings has remained unchanged in the past 30 days.

Bel Fuse’s first-quarter 2022 earnings per share are estimated at 22 cents, suggesting year-over-year growth of 195.65%. Shares of BELFB have dropped 15.6% in the past year.

American Software’s earnings beat the Zacks Consensus Estimate in the last four quarters, the average surprise being 92.14%. Shares of AMSWA have declined 6.7% in the past year.

Iridium has a projected earnings growth rate of 157.14% for 2022. The Zacks Consensus Estimate for Iridium’s 2022 earnings has been revised upward by 2 cents in the past 60 days.

Iridium’s earnings beat the Zacks Consensus Estimate in two of the last four quarters and met the same twice, the average surprise being 39.4%. Shares of IRDM have dropped 3.2% in the past year.

Here's Why You Should Retain SmileDirectClub (SDC) For Now