Valued at $41.7 million, the contract is projected to be completed by April 2023. Per the terms, Huntington will exercise options for the accomplishment of follow-yard services for the DDG 51 Class destroyer program.

The majority of the work related to this deal will be carried out in Pascagoula, MS.

The DDG 51 Arleigh Burke-class is a multi-mission warship. It features an advanced anti-submarine warfare system, the AEGIS combat system, the Vertical Launching System, two embarked SH-60 helicopters along with advanced anti-aircraft missiles and land-attack missiles. Impressively, the warship offers protection against a wide range of threats, including ballistic missiles.

What is Favoring Huntington Ingalls?

Moreover, the fiscal 2023 defense budget includes a spending provision of $5.6 billion for procuring two DDG-51 ships in 2022. So, we may expect relevant contracts and subsequent modifications to boost Huntington Ingalls’ operating results.

Per the latest report by Mordor Intelligence, the global naval vessels market’s worth is expected to increase $253 billion during the 2022-2031 period at a CAGR of 12.8%. This, in turn, should boost the growth of various assault ships, including DDG-51. Huntington Ingalls — being a major shipbuilding giant — is likely to benefit.

General Dynamics has been serving the U.S. Navy by constructing and delivering next-generation combat ships for decades. The company is a co-contractor with Huntington Ingalls for the construction of the DDG-51 ships.

General Dynamics boasts a long-term earnings growth rate of 9.6%.  In the past year, the stock has gained 31.9%.

Bae Systems designs and manufactures naval ships and submarines, as well as their state-of-the-art combat systems and equipment. Also, it offers an array of associated services, including training solutions, maintenance and modernization programs to support ships and equipment in service around the world.

BAE Systems boasts a long-term earnings growth rate of 5.3%.  In the past year, this stock has risen 35.5%.

Mitsubishi Heavy Industries delivered a four-quarter average earnings surprise of 14.4%. In the past year, this stock has improved 13.9%.

In a year’s time, shares of Huntington Ingalls have gained 6.1% against the industry’s 32.5% decline. 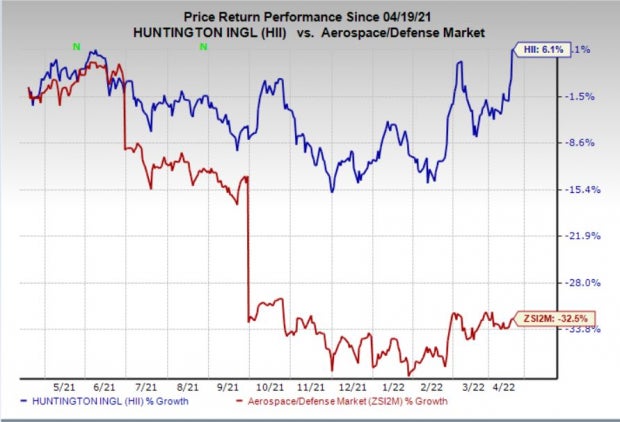 Will Strength in Aluminum Benefit Alcoa (AA) in Q1 Earnings?