Shares of the Zacks Rank #4 (Sell) company have risen 21.6% in the past year compared with the industry’s 13% rally. 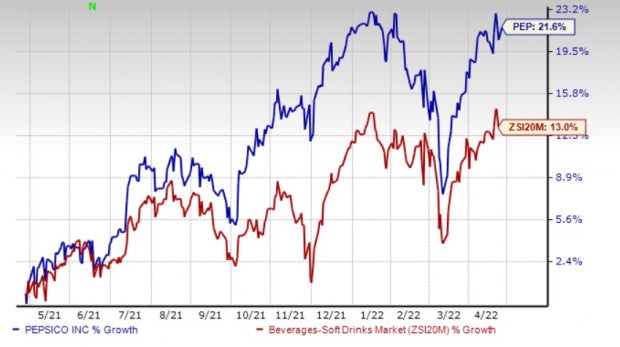 PepsiCo’s first-quarter core EPS of $1.29 beat the Zacks Consensus Estimate of $1.24 and increased 6.6% year over year. In constant currency, core earnings were up 7% from the year-ago period, backed by mitigation of inflationary pressures through cost-management and revenue-management initiatives. The company’s reported EPS of $3.06 grew 148% year over year in the quarter.

Net revenues of $16,200 million improved 9.3% year over year and surpassed the Zacks Consensus Estimate of $15,622 million. Revenues benefited from volume growth and robust price/mix in the reported quarter. Unit volume improved 3% and 6% year over year for the convenient food and beverage businesses, respectively. Foreign currency impacted revenues by 1%.

On an organic basis, revenues grew 13.7% year over year, driven by broad-based growth across categories and geographies. Consolidated organic volume was up 3% and effective net pricing improved 10% in the first quarter. Pricing gains were driven by strong realized prices across all segments.

On a segmental basis, the company witnessed revenue growth across all segments. Revenues for the Europe segment remained flat with the last year on a reported basis. Organic revenues also ascended for all segments.

The company ended first-quarter 2022, with cash and cash equivalents of $6,561 million, long-term debt of $34,590 million, and shareholders’ equity (excluding non-controlling interest) of $18,202 million.

Looking ahead, PepsiCo is optimistic about its strong position in growing the global categories, which is likely to help steer the ongoing challenging operating environment. It expects to benefit by delivering convenience, variety and value proposition to customers through its brands. However, the company anticipates higher input cost inflation for the balance of 2022.

Given the strength and resilience of its businesses, PepsiCo expects organic revenue growth of 8% for 2022 compared with 6% growth mentioned earlier. The company expects core constant-currency earnings per share to increase 8% from a year ago.

Duckhorn currently has a Zacks Rank #2 (Buy) and an expected long-term earnings growth rate of 11.3%. NAPA has a trailing four-quarter earnings surprise of 122.4%, on average. The company has gained 7.1% in the past year.

The Zacks Consensus Estimate for Duckhorn’s current financial-year sales and earnings per share suggests growth of 9.6% and 3.5%, respectively, from the year-ago reported numbers. The consensus mark for NAPA’s earnings per share has been unchanged in the past 30 days.

Ambev currently has a Zacks Rank of 2. ABEV has a trailing four-quarter earnings surprise of 3.3%, on average. It has a long-term earnings growth rate of 7.9%. The company has gained 8.5% in the past year.

The Zacks Consensus Estimate for Ambev’s current financial-year sales and earnings suggests declines of 33.8% and 6.7%, respectively, from the prior-year reported number. The consensus mark for ABEV’s earnings per share has moved up by a penny in the past seven days.

Dutch Bros currently has a Zacks Rank #2. BROS has a trailing two-quarter earnings surprise of 93.75%, on average. It has an expected long-term earnings growth rate of 35.9%. The company has gained 43.9% in the past year.

The Zacks Consensus Estimate for Dutch Bros’ current financial-year sales and earnings per share suggests growth of 42.7% and 3.3%, respectively, from the year-ago reported numbers. The consensus mark for BROS’ earnings per share has moved down by a penny in the past 30 days.