Excluding one-time items, adjusted earnings in the quarter were $1.62 per share, up from $1.27 a year ago. The figure topped the Zacks Consensus Estimate of $1.11.

The company’s revenues rose around 20% year over year to a record $382.8 million in the quarter, beating the Zacks Consensus Estimate of $344 million. In the first quarter, the company benefited from actions to increase prices on strong end-market demand, which helped it offset inflationary cost pressures.

Adjusted EBITDA went up roughly 13% year over year to $119 million in the quarter.

The Performance Chemicals division generated revenues of $234.4 million in the reported quarter, rising around 31% year over year, mainly on strong volume growth and price increases driven by strong demand. Sales rose around 34% in Engineered Polymers while sales in Industrial Specialties applications went up roughly 29% as price hikes offset higher costs.

Revenues in the Performance Materials unit increased around 6% year over year to $148.4 million, aided by regional mix shifts in automotive products sales as well as higher volume and price increases in process purification products.

Operating cash flow was $24.3 million for the reported quarter, down around 52% year over year.

Shares of Ingevity have declined 24.4% in a year against a 15.9% decline of the industry. 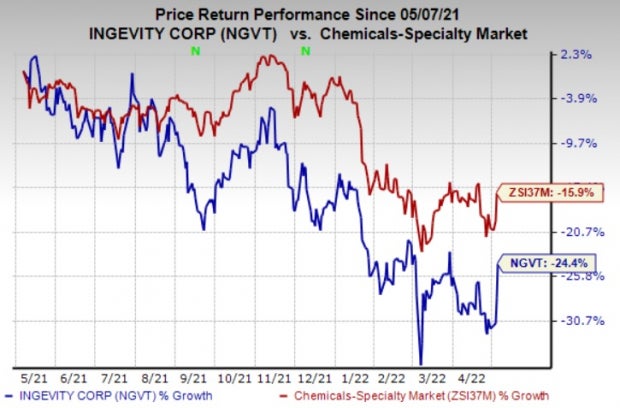 Steel Dynamics beat the Zacks Consensus Estimate for earnings in each of the last four quarters, the average being roughly 2.5%. STLD has gained around 29% in a year.

Commercial Metals beat the Zacks Consensus Estimate for earnings in three of the last four quarters while missed once. It has a trailing four-quarter earnings surprise of roughly 16%, on average. CMC has gained around 23% in a year.

AdvanSix beat the Zacks Consensus Estimate for earnings in three of the trailing four quarters while missed once. It has a trailing four-quarter earnings surprise of roughly 23.6%, on average. ASIX has rallied around 48% in a year.