Nektar Therapeutics (NKTR - Free Report) reported a loss of 49 cents per share for the first quarter of 2022, narrower than the Zacks Consensus Estimate of a loss of 72 cents as well as the year-ago loss of 68 cents.

Quarterly revenues were up 5.1% year over year to $24.8 million during the quarter, beating the Zacks Consensus Estimate of $24.05 million.

Shares of Nektar have declined 67.1% so far this year compared with the industry’s decrease of 19.7%. 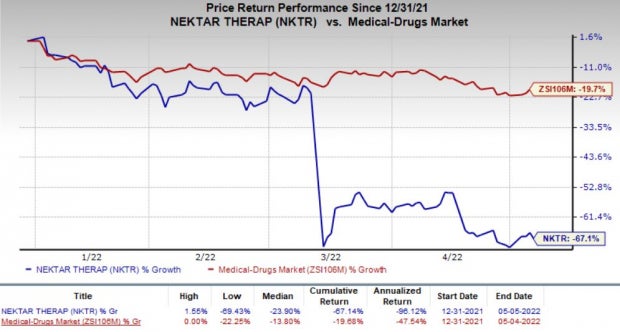 License, collaboration and other revenues were $1.6 million in the quarter compared with $54,000 in the year-ago quarter.

Research and development (R&D) expenses increased 12.2% to $107.3 million due to higher clinical activities, including for recently terminated bempegaldesleukin (bempeg) program during the first quarter. General and administrative (G&A) expenses were down 13.9% year over year to $27.3 million in the reported quarter.

Nektar received a major setback during the first quarter of 2022 as one pivotal study on its lead candidate, bempeg, failed. Data from two other pivotal studies on the candidate showed likely failure. Nektar was developing bempeg in collaboration with Bristol-Myers (BMY - Free Report) . The pivotal studies were evaluating bempeg plus BMY’s immunotherapy drug, Opdivo, in melanoma, renal cell carcinoma and bladder cancer patients. A potential approval in melanoma was anticipated as early as 2023. However, the study failure and dismal data readouts led Nektar and Bristol-Myers to discontinue all development programs for bempeg last month.

Following the discontinuation of the bempeg programs, Nektar is currently focusing on its other key pipeline candidates, NKTR-358 and NKTR-255. The company will also focus on several core research programs. It also announced a cost restructuring plan to extend its cash runway.

In 2021, Nektar signed an agreement with Pfizer (PFE - Free Report) and Germany-based Merck KGaA for the evalution of a new NKTR-255 combo regimen. Per the agreement, NKTR-255 will be developed in combination with Pfizer/Merck KGaA’s PD-L1 inhibitor, Bavencio (avelumab) as a potential treatment for urothelial carcinoma. A combination of NKTR-255 and Bavencio is being evaluated as part of Pfizer/Merck KGaA’s phase II umbrella study — JAVELIN Bladder Medley.

Nektar plans to focus on the development of NKTR-255 as a cell therapy potentiator. Two ongoing studies are evaluating NKTR-255 in combination with CAR-T therapies with external collaborators. Nektar is planning to start a sponsored comparative study on NKTR-255 in the second half of 2022.

As part of its restrucutirng plan to reduce costs and extend cash runway, Nektar intends to reduce its workforce by nearly 70%. The company expects its cost-saving initiatives to help it to end 2022 with cash resources of $440 million to $450 million. It expects its cash resources to be enough to fund its operations into the first half of 2025.

The winding down of all clinical activities related to bempeg will also reduce its operating expenses.

However, Nektar expects its restructuring initiatives to cost the company between $150 million and $160 million, the majority of which will be recorded during the second quarter.