Barring one-time items, adjusted earnings were $2.26 per share for the quarter, up from $1.05 per share a year ago. It topped the Zacks Consensus Estimate of $1.74.

The company raked in record revenues of $479.1 million for the quarter, up around 27% year over year. It, however, missed the Zacks Consensus Estimate of $481.8 million. Sales were driven by favorable pricing and acquisitions. AdvanSix benefited from disciplined execution, diverse portfolio and strong end-market demand in the quarter.

Market-based pricing was 26% favorable compared with the year-ago quarter, aided by increased pricing across the company’s ammonium sulfate and nylon product lines. Raw material pass-through pricing was also favorable by 3% driven by a net cost increase in benzene and propylene.

Sales volume fell around 4% in the quarter mainly due to strong sales in the year-ago quarter as the company lowered its finished goods inventory in the prior year period to meet strong customer demand recovery.

AdvanSix ended the quarter with cash and cash equivalents of $19.3 million, up around 37% year over year.

Cash flow from operations was $49 million (down around 14%) for the reported quarter while free cash flow was $28.1 million (down roughly 34%).

The company repurchased shares worth around $7 million in the first quarter.

AdvanSix projects capital expenditures in the band of $95-$105 million for 2022. It also envisions pre-tax income impact of planned plant turnarounds to be roughly $32-$37 million this year.

AdvanSix’s shares are up 47.4% over a year compared with a 21.3% decline recorded by the industry. 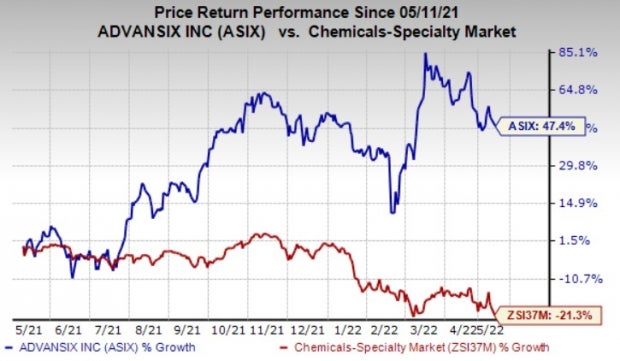 Steel Dynamics, sporting a Zacks Rank #1, has an expected earnings growth rate of 18.5% for the current year. The Zacks Consensus Estimate for STLD's current-year earnings has been revised 32.5% upward over the last 60 days. You can see the complete list of today’s Zacks #1 Rank stocks here.

Steel Dynamics beat the Zacks Consensus Estimate for earnings in each of the last four quarters, the average being roughly 2.5%. STLD has gained around 20% in a year.

Commercial Metals beat the Zacks Consensus Estimate for earnings in three of the last four quarters while missed once. It has a trailing four-quarter earnings surprise of roughly 16%, on average. CMC has gained around 13% in a year.

Nutrien, sporting a Zacks Rank #1, has an expected earnings growth rate of 157.9% for the current year. The Zacks Consensus Estimate for NTR's current-year earnings has been revised 36.6% upward over the last 60 days.

Nutrien beat the Zacks Consensus Estimate for earnings in three of the last four quarters while missed once. It has a trailing four-quarter earnings surprise of roughly 5.8%, on average. NTR has rallied around 53% in a year.

Is Recession Imminent or Have the Bears Gripped Wall Street?