Mercedes-Benz Group AG (DDAIF - Free Report) recently issued a major recall of nearly 300,000 SUVs over a potential brake problem. The recall has impacted certain vehicles of GL-, ML- and R-class SUVs from the 2006 through 2012 model years. Mercedes and the National Highway Traffic Safety Administration have advised owners to park the vehicles until the free recall repair has been performed, as the problem can lead to a loss of braking power. The company has already begun notifying owners.

The auto giant first began looking into the issue in July 2021 after a customer from outside the United States complained of reduced braking during a stop. However, no crashes, injuries, or deaths related to the defect have been reported. The decision to recall was arrived at later on.

According to the company, the SUVs are shipped with brake boosters that may corrode after prolonged exposure to moisture which might crack the brake booster and allow air inside, thus reducing braking effectiveness and in extreme cases, a complete loss of braking power. This would heighten the risk of a crash or injury as decelerating the vehicle via the brake pedal is not possible in such cases.

Mercedes has warned of early signs of failure that include a soft brake pedal or audible signs of air like hissing in the braking system. The vehicles are to be inspected by an authorized dealership. Vehicles that do not show signs of advanced corrosion may continue to be driven without further action. Vehicles with signs of advanced corrosion will undergo an additional test to ensure the functionality of the brake booster. Vehicles that pass the test may be driven for up to two years but should eventually return for an additional repair.

Shares of DDAIF have lost 27.6% over the past year compared with its industry’s 18.9% decline. 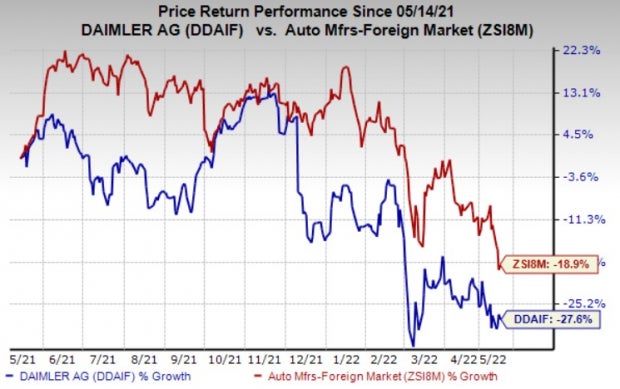 BRP Group has an expected earnings growth rate of 9.2% for fiscal 2023. The Zacks Consensus Estimate for current-year earnings has been revised around 7.3% upward in the past 60 days.

BRP Group’s earnings beat the Zacks Consensus Estimate in all of the trailing four quarters. DOOO pulled off a trailing four-quarter earnings surprise of 68%, on average. The stock has declined 7.8% over the past year.

Dorman Products’ earnings beat the Zacks Consensus Estimate in three of the trailing four quarters and missed in one. DORM pulled off a trailing four-quarter earnings surprise of 3.1%, on average. The stock has lost 5% over the past year.

Standard Motor has an expected earnings growth rate of 1.4% for the current year. The Zacks Consensus Estimate for current-year earnings has been revised around 2% upward in the past 60 days.

Standard Motor’s earnings beat the Zacks Consensus Estimate in all of the trailing four quarters. SMP pulled off a trailing four-quarter earnings surprise of 40.34%, on average. The stock has lost 18.2% over the past year.