KemPharm (KMPH) Stock Up on Deal to Acquire Orphazyme for $12.8M

Shares of KemPharm, Inc. (KMPH - Free Report) were up 7.1% on Monday after the company announced on May 15 that it has signed a definitive agreement to acquire Denmark-based Orphazyme A/S (currently in reconstruction).

With the latest deal, KemPharm is looking to acquire Orphazyme’s arimoclomol, an orally-delivered, first-in-class heat shock protein amplifier, which is being developed for the treatment for Niemann-Pick disease type C (“NPC”), an ultra-rare neurodegenerative disease. Currently, there is no approved therapy for the given indication in the United States.

Per the agreement, KemPharm will acquire all the assets and operations of Orphazyme for $12.8 million in cash. Subject to not only customary closing conditions, but also approvals by Orphazyme’s creditors and the Danish bankruptcy court, the transaction is expected to be completed by Jun 1, 2022.

Shares of KemPharm have plunged 49.6% so far this year compared with the industry’s decrease of 26.4%. 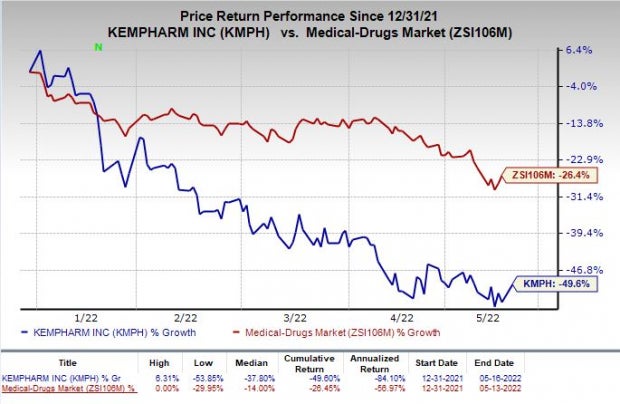 We remind investors that last June, the FDA had issued a Complete Response Letter or CRL against Orphazyme’s new drug application (“NDA”) for arimoclomol to treat NPC. The company also withdrew the marketing authorisation application for arimoclomol in Europe.

KemPharm is planning to work closely with the FDA on the resubmission of the NDA for arimoclomol in NPC, which is expected to be filed in the first quarter of 2023. If successfully developed and upon potential approval, arimoclomol will be a much-needed treatment option for NPC patients around the world.

The above acquisition looks a strategic fit for KemPharm’s aim of developing novel treatments for treating rare CNS conditions.

KemPharm’s recently approved drug, Azstarys, is a serdexmethylphenidate-based therapy for attention deficit hyperactivity disorder. The company received FDA approval for the drug last year. The company has another approved drug, Apadaz, in its portfolio. Apadaz is approved for the management of acute pain. The successful development of pipeline candidates will boost the company’s prospect.

Earnings of Verrica Pharmaceuticals have surpassed estimates in each of the trailing four quarters. VRCA delivered an earnings surprise of 28.45% on average.

Earnings of Aclaris Therapeutics have surpassed estimates in one of the trailing four quarters and missed the same on the other three occasions. ACRS delivered an earnings surprise of -10.67% on average.

Earnings of Soleno Therapeutics have surpassed estimates in two of the trailing four quarters, met the same once and missed the same on the other occasion. SLNO delivered an earnings surprise of -10.92%, on average.