The Chemours Company’s (CC - Free Report) shares have shot up 44.1% over the past three months. The company has also outperformed its industry’s rise of 0.1% over the same time frame. It has also topped the S&P 500’s roughly 6% decline over the same period.

Let’s dive into the factors behind this Zacks Rank #2 (Buy) stock’s price appreciation. 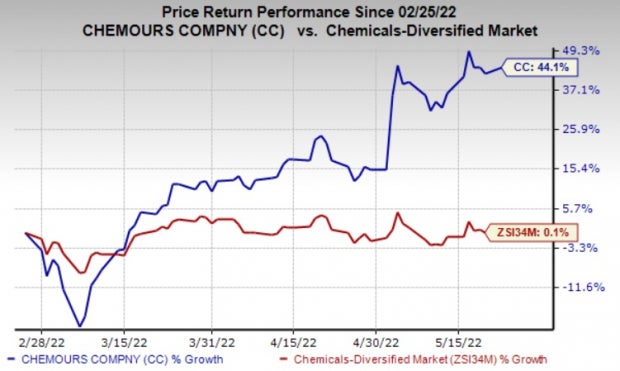 Forecast-topping earnings performance in the first quarter and upbeat prospects have contributed to the rally in the company's shares. Chemours’ adjusted earnings of $1.46 per share for the first quarter trounced the Zacks Consensus Estimate of 92 cents. Net sales rose around 23% year over year to $1,764 million and beat the Zacks Consensus Estimate of $1,543.4 million. Volumes and prices contributed favorably to the top line growth in the quarter.

Chemours is benefiting from a rebound in demand from the coronavirus-induced downturn, strong execution and its cost-reduction and pricing actions. The company is seeing demand revival across its end markets and regions on the global macroeconomic recovery. Strong market demand is contributing to higher volumes and improved pricing.

The company’s Thermal & Specialized Solutions segment is benefiting from strong demand for refrigerants across most regions. It is also witnessing strong adoption of the Opteon platform amid headwinds from semiconductor supply-chain disruptions that are affecting automotive demand. Chemours remains committed toward driving Opteon adoption. Volumes in the Titanium Technologies division are also being driven by steady demand across all end-markets and geographies.

Chemours is also gaining from its efforts to reduce costs. Its cost-reduction program along with its productivity and operational improvement actions across its businesses are expected to support its margins in 2022. It is also taking appropriate pricing measures to counter higher costs partly due to supply chain issues and raw material inflation.

The Chemours Company Price and Consensus

Commercial Metals, carrying a Zacks Rank #1 (Strong Buy), has a projected earnings growth rate of 78.2% for the current fiscal year. The Zacks Consensus Estimate for CMC's current fiscal year earnings has been revised 31.9% upward over the past 60 days. You can see the complete list of today’s Zacks #1 Rank stocks here.

Commercial Metals beat the Zacks Consensus Estimate for earnings in three of the last four quarters while missed once. It has a trailing four-quarter earnings surprise of roughly 16%, on average. CMC has gained around 25% in a year.

Nutrien beat the Zacks Consensus Estimate for earnings in three of the last four quarters while missed once. It has a trailing four-quarter earnings surprise of roughly 5.8%, on average. NTR has rallied 68% in a year.

Albemarle’s earnings beat the Zacks Consensus Estimate in each of the trailing four quarters, the average being 22.5%. ALB has rallied roughly 54% in a year. The company flaunts a Zacks Rank #1.