The BLA seeks FDA’s approval under the accelerated pathway for the candidate in patients with platinum-resistant ovarian cancer with high folate receptor (FR) alpha who have already been treated with one to three prior systemic treatments. The BLA includes data from the pivotal phase III SORAYA study, which evaluated the candidate as monotherapy in the given indication. We remind investors that the company had announced back in November 2021 that the study met its primary endpoint of objective response rate.

The FDA is expected to provide its decision on potential approval for mirvetuximab soravtansine by Nov 28, 2022.

ImmunoGen is currently enrolling patients in another phase III study, MIRASOL, which is evaluating mirvetuximab as monotherapy for platinum-resistant ovarian cancer with FR alpha-high. Data from this study is anticipated in third-quarter 2022. The company will seek full approval for mirvetuximab soravtansine in the given indication based on MIRASOL study data.

We note that ImmunoGen is heavily dependent on the success of its lead candidate. However, the company faced a significant delay in gaining an approval for mirvetuximab soravtansine, following the candidate’s failure to meet the endpoint of a late-stage study — FORWARD I — evaluating it as a monotherapy for ovarian cancer patients whose tumors express high or medium levels of FR alpha in 2019. Based on the FORWARD I study, the company developed the candidate as a monotherapy for treating platinum-resistant ovarian cancer with FR alpha-high. Any regulatory setback or delay will be detrimental to ImmunoGen.

In the year so far, ImmunoGen’s stock price has declined 25.1% in comparison with the industry’s 51.9% decline. 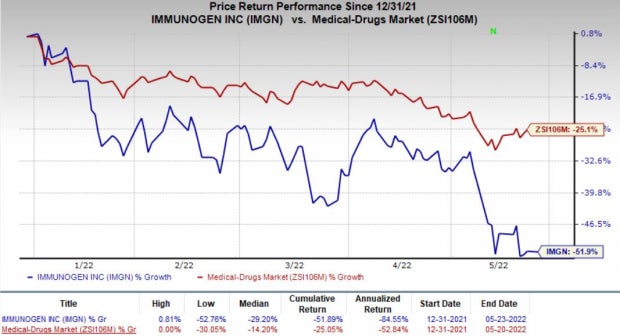 One such partner is Roche Holding AG (RHHBY - Free Report) , whose marketed drug Kadcyla uses the company’s ADC technology. Roche’s Kadcyla is currently approved by the FDA as a prescription drug in early breast cancer and metastatic breast cancer indications. The drug is one of the key drivers of RHHBY’s top line. For full-year 2021, Kadcyla sales were up 16% from 2020.

Last month, ImmunoGen entered into a licensing agreement with Eli Lilly and Company (LLY - Free Report) . The agreement will provide Lilly exclusive rights to the company’s technology to develop and commercialize ADCs directed toward targets selected by LLY.

In return, Eli Lilly will pay an upfront payment of $13 million to IMGN for the initial targets. ImmunoGen is also eligible to receive an additional $32.5 million for any additional targets selected by Lilly. ImmunoGen is entitled to receive up to $1.7 billion in potential target program exercise fees and development as well as regulatory and commercial milestone payments.

ImmunoGen was developing pivekimab sunirine in collaboration with Jazz Pharmaceuticals (JAZZ - Free Report) . However, Jazz opted out of the collaboration in 2020. Resultantly, JAZZ relinquished the rights to receive any royalty payments on the candidate’s sales, upon potential approval.