One thing that consumers are likely less bothered about is the lumber price, since the economy is well on its way toward opening up and we’re not sitting at home building our decks and repairing stuff. Not as many of us as have been doing this in the last couple of years anyway.

But guess what? When prices of a key input declines, there is a ripple effect on various other segments, which is great. Just that investors would be avoiding lumber around now, but that’s OK.

From a level of around $1,500 per thousand board feet in March 2022 to about $600 today, this isn’t any ordinary decline, but can be called a crash. It doesn’t mean, however, that this cheaper commodity will be immediately available to DIYers. There’s likely to be a wait period while suppliers work through their inventories.

Prices have been pretty volatile over the past couple of years, rising in one month only to crash within the next few, but this time is likely to be different. There are two main reasons for this, both related to demand. The first reason is the interest rate hike and resultant increase in the rates on 30-year mortgages. This is pushing entry level and first-time movers out of the market, which is impacting demand for housing (the majority of American homes use wooden frames).

The second reason is that since movement is relatively free now, people would rather spend money on travel (which has gotten very expensive, by the way) than on their homes in which they’ll be spending less time now anyway. Dealers have been cutting prices to avoid getting stuck with a lot of inventory. Since both these factors will remain in play for a while, the downward pressure could continue.

On the other hand, there are also a couple of factors that could help prices once most of the accumulated inventory is gone. The first is the sharp cutback in lumber production, which will ensure that inventories are depleted sooner rather than later.

The second is the underlying strength in the housing market, which is driving continued home construction and sales. If wood prices are sustained at low levels, it is advantageous for homebuilders to produce aggressively to capture the lower cost. Although home owners are still constrained by the high mortgage rates, the way to get them back into the market is by passing on some of the cost gains.

One company that is capitalizing on these trends is Meritage Homes Corp. (MTH - Free Report) . The company has shifted focus to the pure-play entry-level and first-move-up segment where demand is particularly strong.

Despite its decision to cut prices on these homes and the supply chain issues that hurt its operations the same way that they hurt everyone else, Meritage expects to continue expanding gross margins. It is also aggressively adding lots to build more communities at the entry level.

Another company benefiting from falling lumber prices is NVR, Inc. (NVR - Free Report) . The company caters to entry level, move-up and luxury buyers. While it is seeing strength in all three segments, the entry level, whether single-family or lower-end communities, is currently driving its orders.

Another stock up for grabs is Landsea Homes Corp. (LSEA - Free Report) which also focuses on the entry-level and first-time move-up segments. It designs, constructs and sells suburban and urban single-family detached and attached homes in California, Arizona, Florida, Texas and Metro New York.

In the last quarter, Landsea also benefited from the trends mentioned above. Its revenue increased 97%, homes delivered increased over 83% and backlog increased over 83%. It continued to aggressively acquire lots with total owned and controlled lots increasing more than 95%. 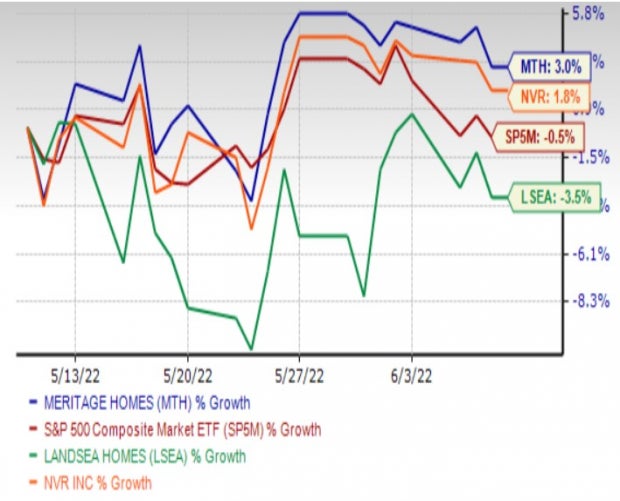