Here's How DICK'S Sporting (DKS) is Placed in a Tough Industry

DICK’S Sporting Goods Inc. (DKS - Free Report) has been strong in a tough market, owing to strength in the core business and ongoing store initiatives. In first-quarter fiscal 2022, the company witnessed growth on a two-year basis, driven by sales normalization in certain categories. In the quarter, both top and bottom lines surpassed the Zacks Consensus Estimate. This marked the eighth straight quarter of an earnings and sales beat.

However, the company has been witnessing headwinds related to higher supply-chain costs and rising fixed-occupancy costs. The ongoing macroeconomic environment, supply-chain conditions and the current geopolitical situation are likely to continue hurting the company’s bottom line.

Although the Zacks Rank #3 (Hold) stock has lost 14.8% in the past year, it fared better than the industry’s decline of 39% and the Zacks Consumer Staples sector’s 30.9% fall. However, the stock compared unfavorably with the S&P 500’s decline of 9.3%. 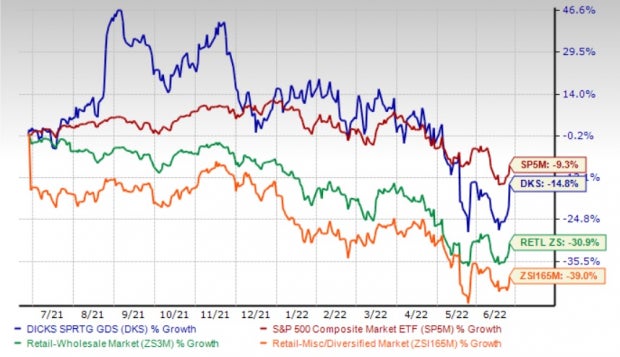 DICK’S Sporting operates as a major omni-channel sporting goods retailer, offering athletic shoes, apparel, accessories and a broad selection of outdoor and athletic equipment for team sports, fitness, camping, fishing, tennis, golf, and water sports, etc. The company has been witnessing strength in its core categories, which is aiding the top line.

In the fiscal first quarter, DICK’S Sporting’s SG&A expenses of 22.8%, as a percentage of sales, contracted 195 bps year over year due to weak sales. Prior to this, the metric contracted 97 bps, 151 bps, 46 bps and 940 bps year over year in the fourth, third, second and first quarters of fiscal 2021, respectively. The persistence of the trend may aid the company’s profitability in the near term.

The company’s store expansion initiatives, driven by DICK'S House of Sport, Golf Galaxy Performance Center, Public Lands, and Going, Going, Gone! Stores, have been on track. It launched its third House of Sport store in Minnetonka, MN. Earlier, it opened two types of concept stores, namely OVERTIME by DICK’S Sporting Goods and DICK’S Sporting Goods Warehouse. The move is in sync with its plans to expand outlet and clearance stores in a bid to offer popular athletic brands at discounted prices.

Despite the earnings and sales beats in first-quarter fiscal 2022, the metrics declined year over year. Consolidated same-store sales (comps) declined 8.4% from comps growth of 117.1%. Adjusted earnings of $2.85 per share were down 25% from the prior-year figure of $3.79. This can be attributable to drab sales and dismal gross margins for the reported quarter.

The gross margin contracted 83 basis points (bps) year over year to 36.5% for the quarter under review due to higher supply-chain costs and rising fixed occupancy costs, which were somewhat offset by improved merchandise margins.

Management slashed its fiscal 2022 view to reflect the ongoing macroeconomic environment, supply-chain conditions and the current geopolitical situation. The company envisions adjusted earnings of $9.15-$11.70 for fiscal 2022, comparing unfavorably with the prior mentioned $11.70-$13.10. Also, comps are anticipated to decline 8-2%, down from the earlier stated decline of 4% to flat.

The Zacks Consensus Estimate for the company’s current financial year’s sales and earnings suggest declines of 3.7% and 30.5%, respectively, from the year-ago period’s reported number.

MarineMax is a recreational boat and yacht retailer and superyacht services company in the United States. It presently sports a Zacks Rank of 1. HZO has a trailing four-quarter earnings surprise of 32.8%, on average. Shares of HZO have declined 20% in the past year.

Ulta Beauty, a leading beauty retailer in the United States, currently flaunts a Zacks Rank #1. The company has an expected long-term earnings growth rate of 10.7%. Shares of ULTA have risen 19.6% in the past year.