Ford Motor Co. (F - Free Report) recently announced that customers leasing any of the company’s all-electric vehicles (EVs) will no longer have the option to buy out the vehicle at the lease end. The policy change has come into effect in 37 states and will roll out nationwide by the year's end. The change impacts the automaker’s three available EVs, namely the F-150 Lightning, the Mustang Mach-E and the E-Transit. It applies to leases initiated on or after Jun 15.

Customers will be able to return the vehicle and get it renewed into a new vehicle, or they may only return it at the end of the lease. For customers who signed a lease prior to this date, the company will provide the opportunity to buy out the vehicle.

The automaker opined that the changes to its lease policy will support its EV battery recycling and materials. Ford had previously announced a $22 billion electrification strategy for establishing the Ion Park global battery center in southeast Michigan. At the facility, Ford intends to scale battery design and production.

The company is aiming for sustainable EVs and driving down the cost of batteries, thereby making EVs accessible and affordable for more Americans. Ford Credit’s plan for EV leasing will ensure that vehicles remain in the Ford network longer, so the company can better manage battery recycling and materials.

Ford’s announcement comes at a time when the inventory levels of new vehicles are low, and the price of used cars is soaring by the day. For consumers coming up on the end of their lease, a vehicle buyout is the most economical choice because the residual value set at the start of the contract will likely be lower than the vehicle’s current market value.

Ford isn’t the only automaker to bring changes to its lease policy. In April, Tesla Inc. (TSLA - Free Report) stated that it will stop lease buyouts for its models. It was the second time that Tesla adjusted its policy after imposing lease restrictions on the Model 3 in 2019.

Shares of Ford have lost 22.8% over the past year compared to its industry’s 18.4% decline. 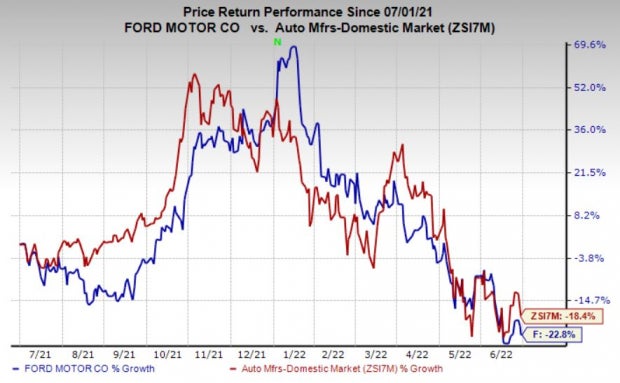 Wabash National’s earnings beat the Zacks Consensus Estimate in three of the trailing four quarters and missed in one. WNC pulled off a trailing four-quarter earnings surprise of 51.26%, on average. The stock has declined 12.5% over the past year.

Genuine Parts has an expected earnings growth rate of 13.6% for the current year. The Zacks Consensus Estimate for current-year earnings has remained constant in the past 30 days.

Genuine Parts’ earnings beat the Zacks Consensus Estimate in all the trailing four quarters. GPC pulled off a trailing four-quarter earnings surprise of 11.34%, on average. The stock has gained 4.1% in the past year.

Nissan (NSANY) Recalls 300K+ SUVs in US Over Hood Glitch