Intuitive’s Ion endoluminal system is a flexible, robotic-assisted, catheter-based platform, which was approved by the FDA in 2019, expanding the company’s services into diagnostic and endoluminal procedures. The system allows biopsy of small and difficult-to-access lesions in the lung as well as biopsy of peripheral lung and provides the stability necessary for precision in a biopsy.

The integration of Siemens Healthineers’ Cios Spin mobile imaging will allow Intuitive to offer 2D and 3D imaging that will help improve biopsy tool placement, leading to better diagnostic yield. The 3D imaging will specially help physicians to place biopsy tools appropriately in a suspicious nodule in the peripheral lung.

Intuitive believes that the new imaging integration could help improve the accuracy of biopsy procedures, a key step to diagnose lung cancer that kills more people annually than any other cancer. Early detection has the potential to improve the survival rates of lung cancer patients. The company’s integration of Cios Spin with its robotic bronchoscopy system is likely to accelerate lung biopsy with more accuracy.

The company is currently focusing on the potential inclusion of other technology collaborators to enhance its ecosystem as part of its goal to make the Ion Endoluminal System a standard of care for lung biopsy.

The installed base of Ion Endoluminal System has gained significantly since its approval. Intuitive’s integration of a mobile imaging technology and focus on enhancing the ecosystem will likely help it to sustain the growth rate.

Shares of Intuitive have declined 44.1% so far this year compared with the industry’s decrease of 30.5%. 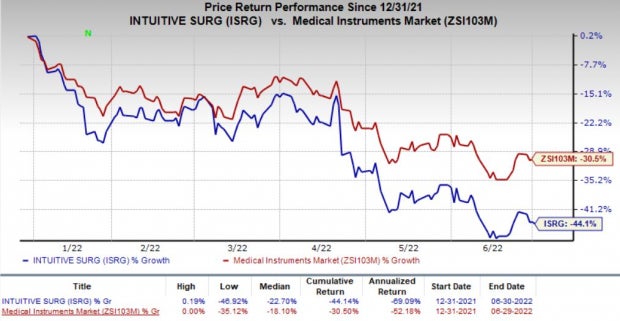 Apart from the Ion Endoluminal System, Intuitive has another robotic system that allows minimally-invasive surgical procedures called da Vinci Surgical systems. The system allows 3D imaging that helps surgeons to overcome many of the limitations of traditional open surgery. The da Vinci Surgical system is the leading revenue-generator for the company.  The company’s first-quarter revenues were primarily driven by strong growth in da Vinci procedure volume as well as a higher shipment of the system.

Although Intuitive’s top line demonstrated robust growth in the first quarter, the rising COVID-19 infections are a concern as they may hurt patient visits to physicians as well as shipments of surgical and diagnostic systems. Per management, the COVID-19 resurgence impacted the company’s procedure volume in the first quarter.

Earnings of AMN Healthcare beat estimates in each of the last four quarters, the average being 15.6%.

Earnings of Masimo beat estimates in each of the last four quarters, the average surprise being 4.42%.

The Zacks Consensus Estimate for Aspira Women's Health’s 2022 loss has narrowed from 33 cents to 30 cents per share in the past 60 days. Shares of AWH have declined 66.8% in the year-to-date period.

Earnings of Aspira Women's Health beat estimates in one of the last four quarters, missed the mark once and met twice, the average negative surprise being 0.35%.

Reasons to Retain CDW Stock in Your Portfolio at the Moment