When the abovementioned deal was signed by CI in October last year, Chubb agreed to acquire Cigna’s stake in Turkey’s joint venture as well. However, CI and CB decided to change the terms and kept out Cigna's interest in the Turkey joint venture from the deal.

Plans of completing the divestiture deal within 2022 were established, subject to applicable regulatory approvals and customary closing conditions. It is worth mentioning that the transaction has been closed within the targeted time period, with around six months to go before the end of 2022.

To acquire Cigna’s businesses, Chubb paid roughly $5.4 billion in cash to the health insurer. Consequently, CI is likely to receive net after-tax proceeds of around $5.1 billion from the transaction, out of which $3.5 billion will be utilized to execute the accelerated share repurchase agreements announced last month. Cigna mainly intends to utilize the full proceeds for share buybacks.

The conclusion of the transaction is likely to fetch dual benefits for Cigna. Firstly, the recent divestiture will enable the health insurer to focus on expanding its global health portfolio, which in turn will drive the growth prospects of the company. With the first-in-class capabilities of its two health platforms — Evernorth and Cigna Healthcare, Cigna extends cost-effective, predictable and convenient health care coverage worldwide. CI has well-performing Medicare business through which it has been devising cost-effective health plans and extending reach across inaccessible regions. Solid demand for Medicare plans is likely to sustain, supported by an aging U.S. population.

Secondly, the deal completion will enable Cigna to pursue share buybacks to the tune of a minimum of $7 billion in 2022. From the beginning of this year, CI commenced repurchasing shares, thereby maintaining its robust share repurchase history. In the first quarter of 2022, the health insurer engaged in share buybacks of $1.4 billion. Apart from uninterrupted share repurchases, Cigna resorts to distributing quarterly dividends and declaring special dividends from time to time.

Cigna seems prudent in utilizing net proceeds from the divestiture to undertake share repurchases to complement the solid capital deployment plans for 2022 that it unveiled in February 2022. As means to deploy capital, management will prioritize share buybacks over large-scale mergers or acquisitions this year. Such endeavors highlight CI’s constant efforts to maximize shareholder returns and the strength possessed in its business portfolio. A strong cash balance and adequate cash-generating abilities equip the health insurer to pursue tactical capital deployment moves.

Shares of Cigna have gained 14.8% year to date against the industry’s decline of 3.2%. CI currently carries a Zacks Rank #3 (Hold). 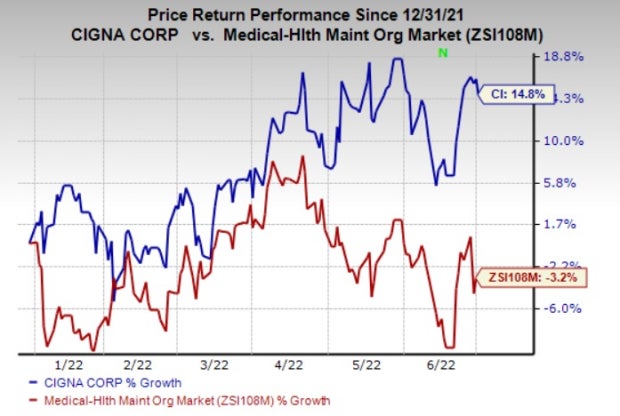 The bottom line of AMN Healthcare outpaced estimates in each of the trailing four quarters, the average surprise being 15.60%. The Zacks Consensus Estimate for AMN’s 2022 earnings indicates a rise of 30.3% year over year, while the same for revenues suggests an improvement of 25.9%. The consensus mark for AMN Healthcare’s 2022 earnings has moved north by 12.4% in the past 60 days.

Molina Healthcare’s earnings surpassed estimates in three of the last four quarters and missed once, the average surprise being 1.51%. The Zacks Consensus Estimate for MOH’s 2022 earnings suggests an improvement of 26.9% from the year-ago reported figure, while the same for revenues indicates growth of 9.1%. The consensus mark for Molina Healthcare’s 2022 earnings has moved north by 0.4% in the past 60 days.

Shares of AMN Healthcare and Molina Healthcare have lost 10.8% and 12.4%, respectively, year to date.