The Sherwin-Williams Company (SHW - Free Report) is benefiting from strong demand in its end markets, pricing and cost-control initiatives and expansion of operations amid headwinds from raw material cost inflation.

Shares of Sherwin-Williams, a Zacks Rank #3 (Hold) stock, have lost 13.9% over the past year against the 13.6% decline of its industry. 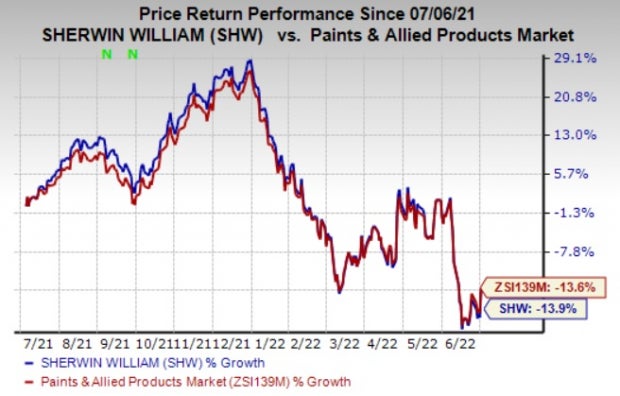 The company also remains committed toward expanding its retail operations. It is focused on capturing a larger share of its end-markets, as is evident from increasing number of retail stores. It expects to add 80-100 new stores in 2022.

Sherwin-Williams also has a strong liquidity position and is using its cash strategically. The company repurchased 1.45 million shares of its common stock in the first quarter. It had remaining authorization to repurchase 47.1 million shares through open market purchases at the end of the quarter.

The SherwinWilliams Company Price and Consensus

Albemarle has a projected earnings growth rate of 231.7% for the current year. The Zacks Consensus Estimate for ALB’s current-year earnings has been revised 112.4% upward in the past 60 days. You can see the complete list of today’s Zacks #1 Rank stocks here.

Albemarle’s earnings beat the Zacks Consensus Estimate in each of the trailing four quarters, the average being 20%. ALB has rallied roughly 22% in a year. The company flaunts a Zacks Rank #1 (Strong Buy).

Cabot’s earnings beat the Zacks Consensus Estimate in each of the trailing four quarters, the average being 16.2%. CBT has gained around 13% over a year.

Allegheny’s earnings beat the Zacks Consensus Estimate in the last four quarters. It has a trailing four-quarter earnings surprise of roughly 128.9%, on average. ATI has gained around 10% in a year and currently sports a Zacks Rank #1.