Shares of Gol Linhas Aéreas Inteligentes (GOL - Free Report) plummeted 43.6% in the first half of 2022, underperforming its industry’s 24.5% decline. 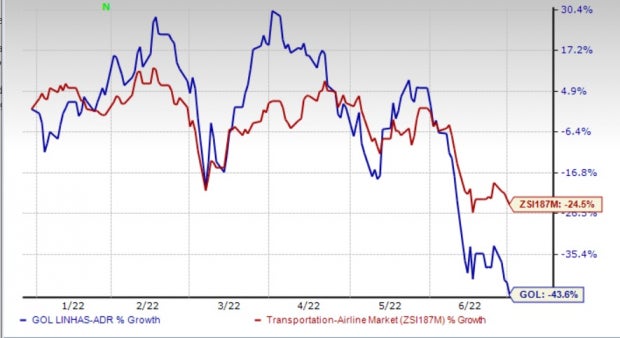 Reasons for the Unimpressive Price Performance

Even though passenger traffic increased from the lows witnessed in 2020, the renewed surge in coronavirus cases in Brazil slowed down air-travel demand. For example, June’s traffic measured in revenue passenger kilometers declined 5.5% from the May reading. The relatively low level of vaccination in the country, with many unwilling to take their booster doses, might have resurged cases, hurting air-travel demand in turn.

Anticipating a higher level of passenger traffic, Gol is constantly expanding its capacity. For example, consolidated capacity (measured in available seat kilometers) expanded 68.6% year over year in June, much higher than the traffic increase of 54%. As a result of capacity expansion outweighing traffic growth, load factor (% of seats filled by passengers) declined 7.2 percentage points to 76.7%. The domestic operations accounted for most of the data as international operations are still minimal.

Will 2H be Any Better?

Even though fuel costs are likely to be a hindrance in the latter half of the year as well, we expect air-travel demand to pick up. Driven by increased vaccinations, we anticipate traffic growth to outpace capacity expansion. This will positively impact the load factor. Moreover, as the year goes on, we expect international travel to pick up, in turn positively impacting GOL’s consolidated traffic numbers.

Moreover, GOL’s acquisition of domestic airline MAP Transportes Aéreos Ltd for R$28 million is a prudent move. The acquisition is likely to boost Gol Linhas’ top line in the latter half of the year by attracting additional traffic.

That the scenario may improve in the second half is highlighted by the fact that the Zacks Consensus Estimate for 2022 has narrowed to a loss of 34 cents from 92 cents, 60 days ago. Also, Gol Linhas currently has a Growth Style Score of A.

Some better-ranked stocks within the broader Transportation sector that investors can consider are as follows:

Eagle Bulk Shipping (EGLE - Free Report) sports a Zacks Rank #1, presently. EGLE has a pleasant surprise history, with his earnings having outperformed the Zacks Consensus Estimate in two of the preceding four quarters while missing the mark in the other two.

Shares of Eagle Bulk have gained more than 4% in a year’s time. Improved market sentiments surrounding the Drybulk market are aiding the stock. EGLE owns one of the largest fleets of Supramax/Ultramax ships, globally. Efforts to upgrade its fleet also bode well.

Ryder System (R - Free Report) has a trailing-four quarter surprise of 48.2%, on average, with its earnings having surpassed the Zacks Consensus Estimate in all the last four quarters. R is benefiting from improving economic and freight conditions in the United States.

Revenues in all segments grew (on higher rental revenues, new business and favorable pricing) in first-quarter 2022. R currently carries a Zacks Rank of 2.