Barring one-time items, adjusted earnings per share rose to $1.28 in the reported quarter from 86 cents in the year-ago quarter. The bottom line topped the Zacks Consensus Estimate of $1.14.

Revenues were $2,362 million, up around 17% year over year. The top line beat the Zacks Consensus Estimate of $2,323.1 million. Huntsman benefited from improved pricing, cost-control actions and its volume strategy in the reported quarter.

Polyurethanes: Revenues from the segment rose 17% year over year to $1,353 million in the reported quarter owing to higher MDI (methylene diphenyl diisocyanate) average selling prices in all regions. This was partly offset by reduced sales volumes, hurt by pandemic-led lockdowns in China.

Performance Products: Revenues climbed 33% to $492 million courtesy of higher average selling prices led by strong demand on commercial excellence programs and higher raw-material costs. Volumes fell due to a shift in product mix based on demand and business strategy.

Textile Effects: Revenues from the division fell 7% to $192 million. The downside is attributed to reduced sales volumes which more than offset higher average selling prices.

Huntsman had total cash of $608 million at the end of the quarter, increasing 19% year over year. Long-term debt amounted to $1,508 million, down 0.9% from the year-ago quarter.

The company repurchased around 8.4 million shares for around $291 million in the reported quarter.

Huntsman said that its focus on cost control, downstream businesses and returning capital to shareholders will remain unchanged regardless of any macro headwinds that may impact the chemical industry in the quarters ahead. Its balance sheet and cash generation places it in an enviable position to take advantage of opportunities to invest in core businesses, the company noted.

Shares of Huntsman have increased 13.1% in the past year against a 9.4% decline of the industry. 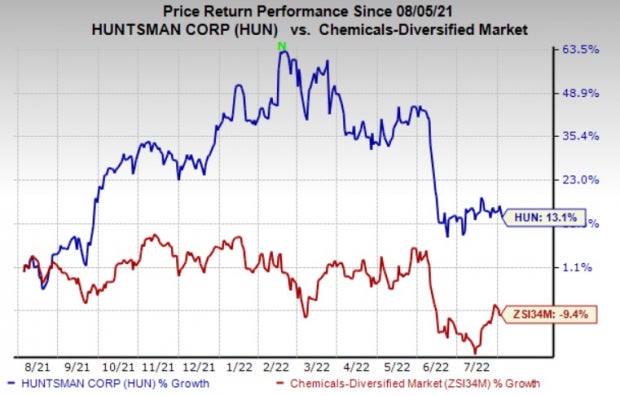 Cabot’s earnings beat the Zacks Consensus Estimate in each of the trailing four quarters, the average being 16.2%. CBT has gained around 37% over a year.

Sociedad’s earnings beat the Zacks Consensus Estimate in two of the trailing four quarters, the average being 28.2%. SQM has gained roughly 92% in a year. The company sports a Zacks Rank #1.

ATI, currently carrying a Zacks Rank #2 (Buy), has a projected earnings growth rate of 1,069.2% for the current year. The Zacks Consensus Estimate for ATI's current-year earnings has been revised 12.5% upward in the past 60 days.

ATI’s earnings beat the Zacks Consensus Estimate in the last four quarters. It has a trailing four-quarter earnings surprise of roughly 128.9%, on average. ATI shares are up around 42% in a year.