ENR’s shares have plunged 21.1% year to date compared with the industry’s decline of 20.4%. 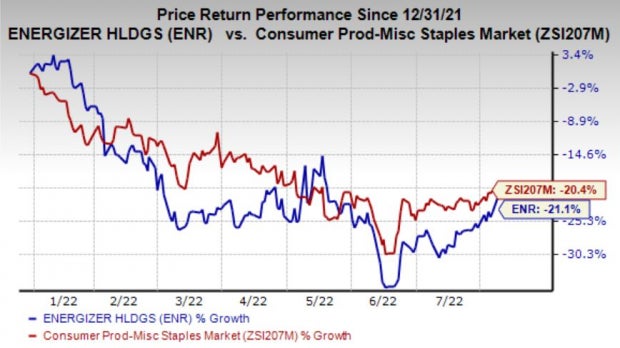 Energizer’s adjusted earnings of 77 cents per share missed the Zacks Consensus Estimate of 78 cents. However, the metric increased nearly 4% from the year-ago quarter, driven by lower taxes, somewhat offset by rising interest expenses.

ENR reported net sales of $728 million, lagging the Zacks Consensus Estimate of $744 million. However, the top line grew 0.9% year over year. Organic sales moved up 3.8% in the quarter under review.

On Oct 1, 2021, Energizer changed its segments from two geographies — Americas and International — to two reporting units, namely Battery & Lights and Auto Care. The move followed the acquisition of Spectrum Brands’ battery and auto care units in the first quarter of fiscal 2022.

In the fiscal third quarter, Energizer’s adjusted gross margin expanded 120 basis points (bps) to 40.4%. This was mainly driven by the favorable impacts of price increases in battery and auto care businesses, which somewhat offset higher operating costs, including transportation, material and labor, as well as ongoing inflation and unfavorable currency impacts.

Excluding costs related to the acquisition and integration, and exiting the Russia market, SG&A as a rate of sales was 16.3% compared with 14.8% recorded in the prior-year quarter. On a dollar basis, SG&A rose $12.3 million due to increased IT spending related to digital transformation as well as rising environmental costs related to a legacy facility and recycling fees.

Adjusted EBITDA was $145.5 million, up 0.8% year over year, owing to price increases in both segments and reduced A&P spending, which was partly offset by higher input costs and elevated SG&A.

For fiscal 2022, the unfavorable currency is expected to affect sales by $60-$65 million. Also, it is likely to incur $20 million due to the adverse impacts of the appreciating US dollar and its exit from the Russia market. This Zacks Rank #4 (Sell) player expects inflationary pressure to persist in the fiscal fourth quarter.

Sysco, the marketer and distributor of food and related products, currently sports a Zacks Rank #1 (Strong Buy). SYY has a trailing two-quarter earnings surprise of 93.75%, on average. It has an expected long-term earnings growth rate of 11%.

The Zacks Consensus Estimate for Sysco’s current financial year’s sales and earnings per share suggests growth of 35.9% and 145.5%, respectively, from the year-ago reported numbers. The company has a trailing four-quarter earnings surprise of 3.7%, on average.

The Zacks Consensus Estimate for Chef Warehouse’s current financial year’s sales and earnings per share suggests growth of 38.1% and 2540%, respectively, from the year-ago reported numbers.