Flowers Foods, Inc.’s (FLO - Free Report) reported second-quarter fiscal 2022 results, with the bottom line beating the Zacks Consensus Estimate but declining year over year. The top line increased on the back of growth in Branded retail, Store branded retail and Non-retail and other sales. Quarterly sales benefited from strength in the company’s leading brands.

Management highlighted that its impressive pricing and portfolio strategies and enhanced efficiencies helped it to mitigate various inflationary and supply chain pressures to generate better-than-anticipated margins. Considering this solid performance, it is raising the lower end of its fiscal 2022 earnings guidance. The company reiterated its full-year sales view.

Adjusted earnings per share (EPS) of 31 cents surpassed the Zacks Consensus Estimate of 27 cents. However, the bottom line declined from 32 cents reported in the year-ago quarter.

Store branded retail sales increased 20% to $157.2 million on favorable prices. Volumes were in line with the year-ago quarter, as gains from sales mix shifts were mitigated by targeted sales rationalization and packaging shortages.

Non-retail and other sales jumped 11.4% to $235.9 million, mainly driven by increased pricing. This was somewhat offset by soft volumes for fast food and co-manufactured products.

Materials, supplies, labor and other production costs (excluding depreciation and amortization) escalated by 240 basis points (bps) to 51.9%. This resulted from increased ingredient and packaging expenses, somewhat negated by higher sales and timing differences in the sell-through of product inventories.

Selling, distribution and administrative (SD&A) expenses came in at 38.8% of sales, down 130 bps, courtesy of price increases, reduced labor and marketing expenses and lower distributor distribution fees. These factors were somewhat offset by a rise in logistics expenses. 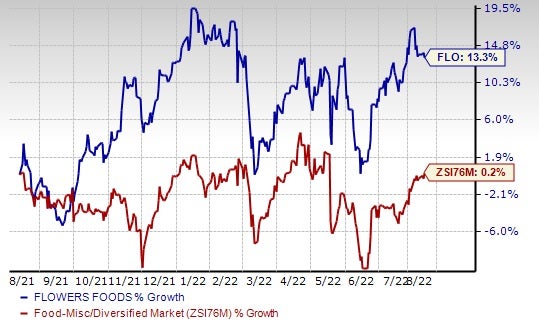 Flowers Foods ended the reported quarter with cash and cash equivalents of $162.5 million and long-term debt of $891.2 million. Stockholders’ equity amounted to $1,447.5 million.

For the 28-week period ended Jul 16, 2022, FLO’s cash flow from operating activities amounted to $183.8 million, while capital expenditures were $97.9 million. Flowers Foods paid dividends worth $93.4 million during this period.

Shares of this Zacks Rank #2 (Buy) company have increased 13.3% in the past year compared with the industry’s 0.2% growth.

Chef’s Warehouse, a distributor of specialty food products in the United States, currently flaunts a Zacks Rank #1 (Strong Buy). CHEF has a trailing four-quarter earnings surprise of 355.9%, on average. You can see the complete list of today’s Zacks #1 Rank stocks here.

General Mills, which manufactures and markets branded consumer foods worldwide, currently carries a Zacks Rank of 2. GIS has a trailing four-quarter earnings surprise of 6.5%, on average.