NTM disease is a pulmonary lung infection caused by Mycobacterium avium complex (MAC), a species of NTM bacteria, accounting for almost 80% of the NTM lung disease cases in the United States.

RHB-204 has been granted orphan-drug status after a positive recommendation from the EMA’s Committee for Orphan Medicinal Products (COMP).

Shares of RedHill Biopharma were up 9.2% during market hours on Aug 17, after the announcement of the news. However, the stock has declined 58.5% year to date compared with the industry’s fall of 17.4%. 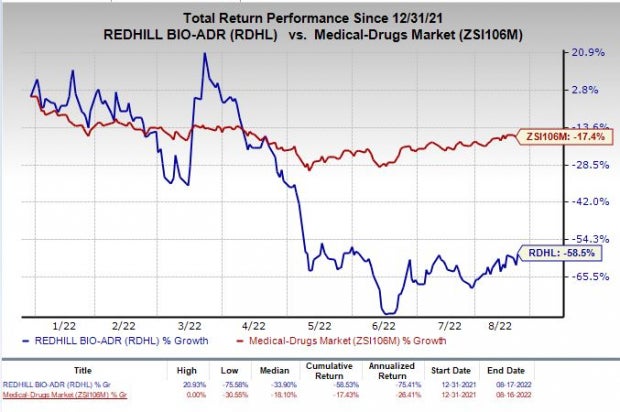 The company is currently conducting a phase III study for RHB-204 in the United States, evaluating the safety and efficacy of the candidate in adults with NTM disease.

NTM infections are extremely difficult to treat, and there are no approved stand-alone therapies for the same in the world. RedHill is thus developing RHB-204 as the first stand-alone first line therapy for the NTM disease as a standard of care.

RHB-204 was granted Fast Track designation for the aforementioned indication, by the FDA, In January 2021. This, in turn, extends the U.S market exclusivity for the candidate for potentially 12 years, upon FDA approval. The candidate also enjoys Qualified Infectious Disease Product (QIDP) designation and Orphan Drug designation in the United States.

The company is also pursuing potential partners to fund RHB-204 across multiple territories.

It is also evaluating RHB-107 in a phase III study for non-hospitalized symptomatic COVID-19 and multiple other cancer and inflammatory gastrointestinal diseases.

Earnings of Aquestive beat estimates in three of the trailing four quarters and missed the same on the remaining one occasion. The average earnings surprise for AQST is 11.47%.

JAZZ surpassed earnings in three of the trailing four quarters, missing the same in one. The average earnings surprise for Inozyme is 10.94%.

Earnings of Soleno missed estimates in three of the trailing four quarters and were in line with the estimate in the remaining occasion. The average earnings surprise for SLNO is 11.40%.