In a major announcement, Ford Motor Co. (F - Free Report) has stated its decision to downsize its workforce by 3,000 as part of an intensive cost reduction and restructuring efforts. The move will impact salaried and contract workers. Most of the reduction will be in the United States, Canada and the Ford Business Services operation in India. Of the 3,000 employees, 2,000 are salaried employees and 1,000 are agency personnel.

The restructuring plan, announced early this year in March, split its electric vehicles (EVs) and internal combustion engine (ICE) vehicles into two major units. The Ford Model e is customized for EVs, software and connected vehicle technology, and the Ford Blue oversees existing and future ICE vehicles like the Mustang, F-150 and Bronco. The two units function under the company’s existing corporate ambit and there are no talks of a spin-out. A third unit, known as Ford Pro, provides commercial and government customers with work-ready ICE, electric products and services to manage fleets.

Since the launch of its restructuring efforts many were hinting at a significant workforce reduction by the company. In recent months, Ford itself had signaled the impending job cuts.

F opined that its focus on the electrification-driven restructuring efforts has necessitated the re-deployment of its resources to become on par with competitors. Many job positions have skills that have become redundant over time. Therefore, it intends to shuffle its workforce to make it more competitive and dynamic.

The current phase of job cuts comes after a smaller one announced in April when Ford laid off 580 salaried employees — 350 salaried and 230 agency positions — as part of its Ford+ plan. The plan looks to explore the e-mobility future and enhance customer experience. By 2030, Ford expects EVs to account for 50% of its global sales, cementing its position in the red-hot EV landscape.

Like most automakers, Ford’s job force is largely meant for supporting traditional combustion technology products. But to catch up with the largest U.S. EV player, Tesla Inc. (TSLA - Free Report) , Ford’s approach to transition to electrification has been an aggressive one. With its electric sport-utility vehicle, Mustang Mach-E, launched in late 2020, and an electric version of its F-150 pickup truck this year, the company has become the largest seller of EVs in the United States after Tesla. Also, Ford earlier announced plans to build two battery plants in Kentucky and a third battery plant and an electric truck plant in Tennessee.

Ford’s hunger to generate revenues through digital software and connected services requires it to streamline its workforce with the people having the right set of skills.

Shares of F have jumped 15.3% over the past year outperforming its industry’s 1.3% rise. 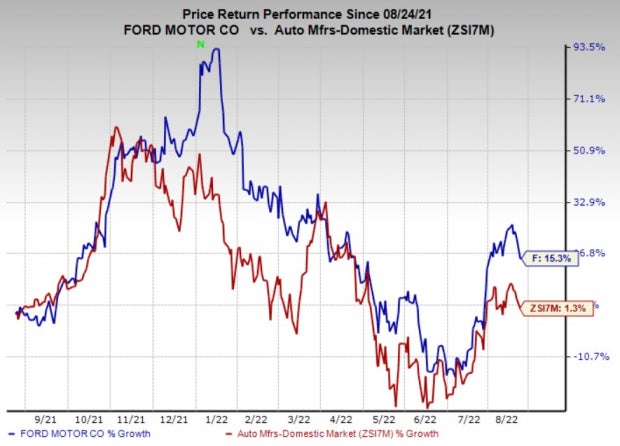 Harley-Davidson has an expected earnings growth rate of 6.9% for the current year. The Zacks Consensus Estimate for current-year earnings has been revised 8.5% upward in the past 30 days.

Harley-Davidson’s earnings beat the Zacks Consensus Estimate in three of the trailing four quarters and missed in one. HOG pulled off a trailing four-quarter earnings surprise of 49.52%, on average. The stock has declined 1.3% in the past year.

LCI Industries has an expected earnings growth rate of 68.1% for the current year. The Zacks Consensus Estimate for current-year earnings has been revised 1.3% upward in the past 30 days.

LCI Industries’ earnings beat the Zacks Consensus Estimate in all of the trailing four quarters. LCII pulled off a trailing four-quarter earnings surprise of 26.48%, on average. The stock has declined 11.5% over the past year.