Viracta (VIRX) Up on Orphan Drug Tag for Peripheral Lymphoma

The EC grants The Orphan Drug designation in the European Union (EU) to a drug or biologic based on a positive opinion of the European Medicines Agency’s (EMA) Committee for Orphan Medical Products (COMP). The ODD is granted to a product candidate intended to treat, prevent or diagnose a rare disease or condition that does not affect more than five in 10,000 people across the EU.

The ODD from the European Commission marks Nana-val’s first in Europe and fifth globally.

It has also received Fast-Track designation from the FDA for treating relapsed/refractory (“R/R”) EBV+ R/M NPC.

Shares of Viracta have returned 31.7% in the year-to-date period against the industry’s decline of 25.2%. 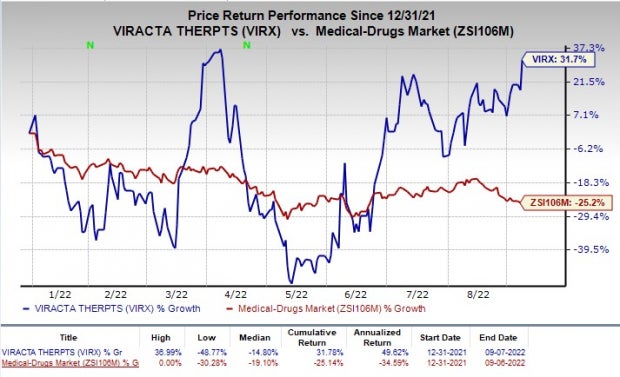 Nana-val is an all-oral combination of Viracta’s proprietary investigational drug, nanatinostat, and the antiviral agent valganciclovir. The combination is being evaluated in multiple clinical studies in various subtypes of Epstein-Barr virus (EBV)-associated cancers.

It is currently being assessed in a stage 1 pivotal study (NAVAL-1) to treat EBV-positive (EBV+) lymphoma and its subtypes. An update on the initial cohort of the NAVAL-1 study is anticipated in the fourth quarter of 2022. The results could potentially advance the candidate into stage 2 of the NAVAL-1 study. If successful, Viracta is optimistic that top-line data from NAVAL-1 can potentially support multiple new drug application (NDA) filings across various EBV+ lymphoma subtypes.

Nana-val is also being evaluated in an open-label phase Ib/II study for the treatment of EBV+ recurrent or metastatic nasopharyngeal carcinoma (“R/M NPC”) and other EBV+ solid tumors. Preliminary safety and efficacy data from the phase Ib dose escalation portion of the study is expected in the fourth quarter of 2022.

Earnings of Aerie beat estimates in three of the trailing four quarters while missing the same in the remaining occasion. The average earnings surprise for AERI is 70.27%.

Earnings of Catalyst missed estimates in two of the trailing four quarters, were in line in one and beat the same on the remaining occasion. The average negative earnings surprise for CPRX is 5.41%.